A quick update on progress

My last post was on October 25! It is now November 17...almost Thanksgiving. The weather has definitely turned the corner to colder days. We've had a fair amount of rain over the past few weeks as well. It makes it hard to get motivated to go out into the ramshackle carport to fight with the parts I can't get to budge.
But, I managed to get a few hours in, here and there, during my days off.
The struggle with the distributor went on for several weeks. It resulted in more trips to Home Depot and Harbor Freight than I had hoped, but I finally found the winning combination: brute strength and a mid-sized pry bar. 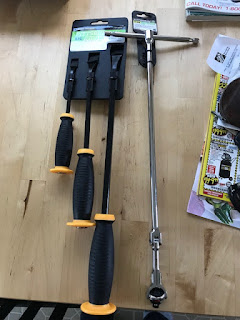 It was a moment of sheer joy when that thing popped out. I was happy to have been warned that the distributor in my car did not have gears attached...that the end simply looked like a flat-head screwdriver. If I had not known that before removing the part, I would've thought I had broken the end off! 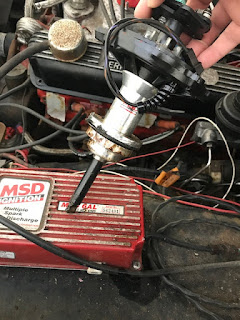 Once that was out of the way, I was able to loosen all the bolts on the intake manifold. I have not taken it out yet, however. I have a list of things I'd like to have done before the snow falls and/or working conditions are less than ideal.
So, even though I'm feeling good about moving forward with the engine, as far as removing parts and cleaning out the gunk, I'll likely be saving that for Spring.
In the meantime, I made the decision to forgo welding the trunk. The hole was fairly large, and definitely a welding job for someone in the know, but I just did not see myself attaining that skill (or equipment) in a timely manner. Instead, I chose to use a resin/fiberglass patch. 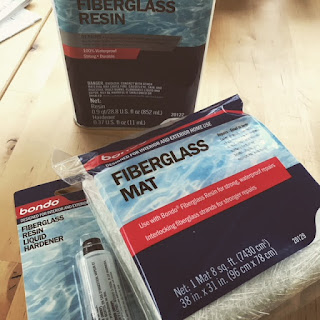 I had already done some patching over the small holes with Bondo body filler. It is unfortunate that I didn't think to just go with the fiberglass from the start, but I am hoping the overlapping of fiberglass over filler won't be too problematic. 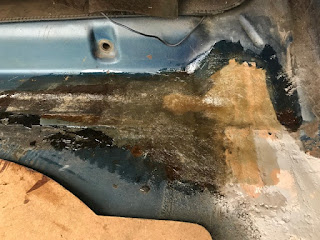 I still have to get out there to sand and see how it looks, since the day I did it, I ran out of time doing other chores. ugh...life.
With that patch ready to sand, and then the trunk ready to prime (and possibly paint, in the future), I can finally get the new fuel tank in and tie up the fuel lines. With that done, I can finally finish hooking up the new brake lines and finish the front brake conversion and re-assemble the rear drums. The new shocks can go on, all around; and, I can get the tires mounted and ready.
Spring can be all about getting the engine and exhaust squared away and with any luck, it'll be on the road by summer.
Now, I'm not counting my chickens, by any means, but I'm finally at a place where I feel like I'm moving steadily forward.