Wow! My last post was in August! And it's almost November!?
It's not from lack of work...not that I'm 'killing it' with the progress, but I am making more of an effort to actually get out there and work before the weather gets too cold.
Upside, this year, is that I bought a lamp this past spring, which turned out to give off a ton of heat, so working later into the year is not out of the question.
This will be a short post. The past couple months have been a little hectic: in-law visit, vacation, dead fridge...you know...life getting in the way.
Hubby took a trip back to Ohio to see his folks and help a friend move, so I took some extra time off to concentrate on the car...but then the fridge broke and I spent a day fixing that instead. And, I'm not gonna lie...when I have the house to myself I become very unmotivated to do anything more than binge watch my guilty pleasures and get up early and bake.
But anyway, I did spend a day cleaning and sanding the rust in the trunk and getting a little bit of patch work done.


I managed to get the valve covers off to expose an unsettling amount of rust. So I spent some time cleaning those as well. 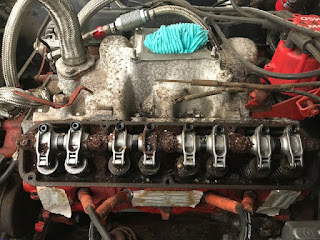 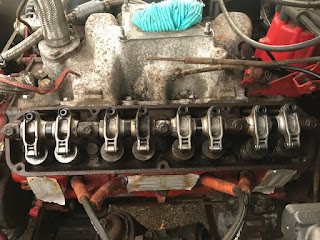 The trouble this time...the thing that has got me frustrated and questioning my sanity...the intake manifold and distributor.
My hope this month was to get the manifolds swapped out (original back in)...but there is one bolt that is inaccessible (as far as my ability) without removing the distributor (which I was really hoping to not have to do).
Okay, fine, I give...I'll remove the distributor. Off to the YouTubes I go...'mark this, mark that'...take the cap off...slip it right out...
Um...no...it does not 'slip right out'. In fact, it feels pretty cemented in there.
I've tried all I can think of and can only guess that the seal is just really tight and maybe I can pry it out with a mini pry bar. Or, worse, is that it's somehow fused/rusted at the gear end, inside the engine. (that thought, of course, makes me want to cry)

With the wind and the rain today, I'm not likely to get out there and work, but somehow, sometime soon I need to figure out a way the get the distributor out...or at least a way to get that hidden manifold bolt out.
Here's hoping my next post is about how I finally figured it out!