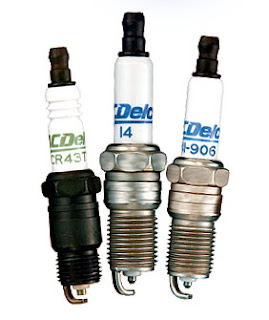 I think spark plugs are so cool!  I don't know why.  Maybe it's because they are such seemingly basic pieces, but they are so complex and important!
Well, it doesn't really matter how amazed I am by a spark plug, or that I would love to have one on a necklace or at least a key chain.  What matters is that, after all of these years of thinking, 'ah, spark plugs...I can change those, no problem!' I have discovered that, all this time, it's been true.
Here's what I took away from last night's class: my teacher has confidence in me and doesn't have a problem saying, 'well, go ahead and take out the spark plugs' and then walk away to show the boys how to do an oil change or brake job for the 3rd time.  I'm getting cocky...let's move on.

I did, in fact, work on my own last night.
I had the four tires off the Barracuda and jammed into the trunk/back seat of the Cav.  So, I, with the help of the guy who's been there 'for 10 years!' (according to the exclamation of Mr. Drys), began removing tires from rims.  We spun the rims on the balancer to get a better look at the shape they're in...we're gonna take the chance that they're still in good shape.  They are all round, in relation to each other, so unless they are all bent and mangled in exactly the same places, then I think we're good!  Next step: get new tires.  I have one last class, and Mr. D. is on board with mounting and balancing if I bring everything in next week!
I had to bring all the old tires home with me, though...no free disposal.  They're going to make lovely little planters!
I had to cut the valve stems off, because...well, because I'm getting new ones anyway, so why waste effort trying to pry those bitches out!?  I kept the little do-hickies pictured above, because I think I actually will put them on a necklace (or maybe earrings)!  I think they are pretty cool looking.

After my work with the wheels, I cleaned up my mess.  Two of the boys had started the front brake job on the Saturn (yes...still working on Ricky's Saturn!).  Two of the boys were doing an oil change on Josh's truck.  And, that left me...already having done at least 3 oil changes, and my own brakes...to do something else.  'You wanted to do tune-up stuff, right?'
I sure did!
There happened to be a 2004 Chevy Cavalier, all lonely and sad.  'Go ahead and take the plugs out.'  He told me to check the computer for the location of the plugs, since I can't seem to find anything in this model of car.  Seriously, Chevy...why have you hidden everything??
Pulled up the specs on the computer, and we went over to the car and I said, 'is that it, there?'
Yep, go ahead and remove that cover and take 'em out.
He headed back over to the boys and I was on my way.  Now, here's how I know he has at least a little more confidence in me than the other 3...normally, his statement is followed by, 'you'll need [insert required socket sizes, tools, etc]'.  But not this time.  He just walked away.
And, here's how I know that I have more confidence in myself than I did 7-8 weeks ago...I took a look at the little bolts holding the cover on, went over to the wall and picked 2 sizes of sockets.  The first was what I thought I needed, the second was the next size down (just in case).  My first guess was right.  I'm so proud.

So, I successfully pull out the plugs, look up the specs (plug size, gap, torque).  Before I even read the size I need, I can tell that I have 3 different types of spark plugs that I've taken from this car!  Of course, it's a donated, school/class car with no battery, so it's not like it's a big deal.  But I thought maybe it was a test...
'Did you get the plugs out?'
'Yes...one is cracked and only 2 of them match.'
He laughed, checked my 'work', explained a few things to me, and said, 'okay...go ahead and put it back together.'

At that point, the boys were finishing up and we had about a half hour left.  So, we went to the Saturn wagon sitting there and I had to do it again.  This time, since the boys were starting to mill about around me, I asked if anyone else wanted to give it a go.  Nothing but a bunch of head-shakers!
I got to 'gap' the ones out of the Saturn, so that was new.
All in all, I didn't do much last night.  And, I almost didn't go (if not for the tires, I wouldn't have).  But, even when I don't feel like I 'learned' much, I like the feeling of being in the garage, and the opportunity to learn.  Even if it's just the littlest thing...it is something I didn't know before I got there.

As I said, next week I'm hoping to get new tires on the old rims.  It's our last class.  I wasn't planning on going to the last class, for fear there would be a test and I would embarrass myself.  (There's also a bit of a time crunch next week, now since everything I was planning on doing this week has been moved to next week...and I was unable to plan time off next week.)
But, now I can't miss it.  So, you're gonna get just one more blog about class...and then, who knows!?
(actually, I know.  Brother Dan is coming out Sunday...leaf springs...yikes!)