I had every intention of skipping my last class.  I know I have said from the beginning that I had had just about enough of the drive after the very first class.  Well, every week I got closer and closer to convincing myself that at the very least, I would not go to that last class.  What if there was a test and I humiliated myself by discovering that I had, in fact, learned nothing!?
Well, we got down to the wire on what I was doing, and I had to go to the last class to put my new tires on my old rims, for the Barracuda.
I had to make a special trip back to the tire store b/c they did not give me the valve stems and I was embarrassed to tell the guy.  Why?  Because I had to correct him twice already, for bringing me the wrong tires...twice.
Doesn't matter!  What matters is that I did make it to the last class, with everything I needed to get the tires ready for the day the Barracuda was ready to roll.  Everything except rims that weren't ruined!
Yes, I spun them to see how they looked, and we decided that they seemed salvageable...'we' were wrong.
I'll get to that after I share the progress of the rims:
So what happened?  The first tire was off a bit, but not so much I couldn't work with it.  'Put that one on the back' says the teacher.  I thought there was one that looked a bit iffy, so we figured that must be the one.
Each one got worse!  The next one needed 4.75oz balance on one side & .75 on the other!  The third one needed SIX OUNCES of weights on one side for balance!!
I made the decision to just take the 3 tires back off the rims.  I'm gonna stick with the 14" rims, and keep the tires I bought, but now I have two options: 1) find new 14" rims; or, 2) find someone to fix the ones I have.
I didn't think they were that bad!  But I know nothing about tires.  Live and learn.  I won't be needing tires on that car for quite some time anyway.  I was only doing it now to use the equipment in class.  Oh, well...moving on, not depressed, frustrated, or annoyed at all. (well, maybe a little of all of those things...)
The teacher said that if I had my new rims by Thursday night, I could come back and put the tires on during his Thursday night electrical class.  That's not going to happen...he seemed sad about it.


The rest of the last class...
It wasn't bad, honestly.  We did not get our little paper to say we finished the class, but that is fine.  They will mail it and I will have proof that I didn't skip out on my classes like I said I wanted to every week.
I was asked if I was going to come back in the fall for another round.  Could I learn more?  Not sure.  Would it be worth it if the 'Cuda was running and I could drive it to class and work on it there? Absolutely, but that won't happen.  Maybe I can take the class again when the car is at that point.  However, I'm kind of hoping I won't NEED a class at that point.  My brother has been so much fun to have helping me.  I have more friends offering to help than I ever imagined.
All in all, I am glad I took this class.  I do feel like I learned some basics, not a ton of major issues, but I have looked under a car hood at least once a week for 9 weeks!  I feel comfortable.  That's progress for me.  I gained confidence knowing my teacher had confidence in me.  It was a great experience for me.  Totally worth the agony of getting worked up every week.  If there was a class to get over my anxiety I might take it...if I could get over my anxiety of being in school again.

And, on to Barracuda news! 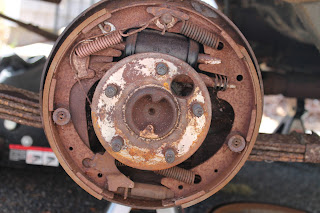 We were able to get the back drums off!  And with less effort than expected. 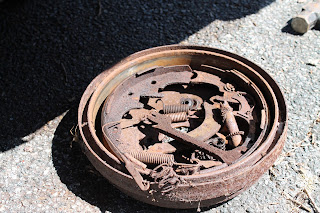 Dan did one side and said, 'you do the other side! I'm not gonna do them both!'
I'm so glad he's sticking to his word, and letting me help instead of just taking over. 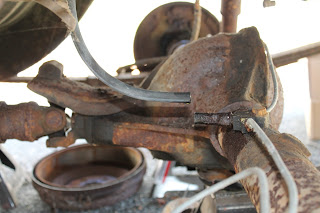 We cut the brake line because the nut was immovable.
Now, I'm still unclear why we took this route, and I think it's because we weren't thinking...
We had to lift the axle up and over the leaf springs to get it out from under the car.
But then...
We removed the leaf springs.  I guess it was nice having the springs there to catch the axle so that it didn't just tip to one side or the other (we had a jack under the center to keep it from dropping to the ground).

So...where are we now?
The car is up on 6 jack stands.  The rear axle, shocks, and leaf springs have been removed.  The replacement springs are in the trunk.  They are not exactly the same as what we took out.  I'm in the market for some new bushings (everything was just so seized and fused to the other parts...we did a lot of cutting and prying, trying to get pieces off).  I need a lot of new bolts, and Dan is cleaning some parts...making new pieces to replace some bits that had to be cut off.  I have a piece of sheet metal in the shed that will eventually fill the gaping hole where the trunk floor used to be.  We'll clean the outer part of the axle, but have to replace all the inner workings probably.
There's quite a bit of body work to be done.  I'll be researching rear quarter panels, as well as rims, now.

We're working on it, and that's all I can really hope for right now.  It's slow going, but it's going.  It's a project car, and I'm having fun doing it.

OH!! and there was a matte black Olds 442 in the garage at school last night!  A real beauty!  I think I officially have the muscle car bug and want something cooler when this one is finished.  Not that I don't still love the car I have, but we have to evolve, right?