Class #6: Tires from rims (not mine, though)

First thing's first...I love looking out the window at the 'Cuda after a rain storm, sans tarp, with no drops of rain on the inside of the windows!  At least it appears I did the seal replacement correctly!

Now, onto more frustrating matters....
Let's start with the most difficult problem: the wheels.  They seem to have become part of that car.  The 6 or so years it's been sitting out in the elements of the East Coast, on 4 flat tires, has put me in a bad place.
After several classes involving an impact wrench and the removal of tires, I thought I had this. 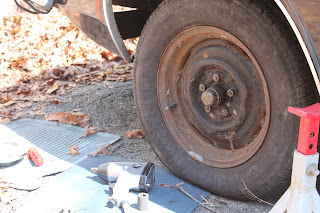 I went out and got myself an impact wrench, a couple new jack stands, borrowed an air compressor from a friend, and I even got two of the most beautiful days we've seen out here since the summer.
Yet, even with all the stars aligning in my favor, I still could not get those damn lugs to budge!
I must be doing something wrong.  Now, to be fair to myself, I did try turning the lug nuts in the opposite direction, just to cover all my bases, but they would not move.
I got on facebook, like any normal person these days would do, to ask...BEG...for help.  I got lots of great advice, just nothing I hadn't tried already.  I had made an extra trip to AutoZone for some PB B'laster (the stuff we use all the time in class), and sprayed and waited.  Tried again.  Sprayed them again...waited overnight and got right back to it after work the next day.  NOTHING!
At this point, I had gotten a couple private messages from a friend of my Great Aunt out in Michigan.  She had shared my facebook plea for help.  This friend of hers said a car this age would probably have left-threaded bolts on the left side wheels.  So, now I was sure I had been tightening them the whole time.
Upon closer inspection, and now with cleaner bolts, due to all the stuff I had sprayed on them, I saw it.  The glaring proof that I have no idea what I'm doing!
Unfortunately, even the other side gave me grief.  So, I didn't have my wheels to take to class.  I was hoping to use the equipment in class to get those tires free.  We did learn how to do that...and we used the tire balancer, too.  I'm not giving up.  As much as I want to.  That stupid car wants to live again...who am I to deny her that!?  If I can get the tires off, I still have two classes left, and I know how to use the machines now, so...it's still possible!

But class was not all tires, last night.  I also learned how to test and remove and replace a battery.  I'm not about to go out and buy a $500 hand-help computer to check my battery.  That is just info I have now...not really good for anything.  Although, now I'm confident that I can disconnect and reconnect a car battery without killing myself, so that's something.

Back to the beginning of class...
I, of course, because I am cursed with the need to be early for everything, was the first to class again.  I spoke with Dan about my dilemma and what I had done so far.  I told him I had tried everything except heat.  That I didn't have a torch, and that I was thinking of getting a nut splitter to just cut the damn things off.
He suggested I buy a cheap propane torch or ask a plumber friend to use his acetylene torch to heat the lug nuts.  Or, get a breaker bar (and possibly a longer pipe to add even more leverage) and try that before cutting the lug nuts.
I think I have gotten to that point where I just want this part done.  I had discounted trying a breaker bar, simply because I figured that if an impact wrench couldn't get it done, how is my brute strength gonna do it.  It's all about leverage, I know.  I guess I should try to do things the right way, instead of resorting to destruction.

Other mildly annoying discoveries...there's no class next week, due to Spring Break or whatever.  That means I actually have 3 weeks until I'm done driving to Bourne.  That means my last class is now the day after my first roller derby practice.  That means I will be getting approximately 6 hours of sleep in a 60-65 hour stretch.  I may die.