The date is set;and, why it's good to work in a customer service field

Oh, boy! Oh, boy!!
Steph bought a house!!!!!!!!!  And, it's not far from Dad's house!  I think all my nagging has paid off, as well.  She originally said that it would be a few weeks after they moved in, before we could move the car there.  They were planning on sealing the driveway first.  But, for whatever reason they are not doing that.  I have been told that she is having the car moved on July 10!  The Tuesday after they close on the house.
So, here we are, approaching the big bill.  In my mind, since my towing experience is limited to the one time my car was actually towed and a few weeks ago when I thought it would have to be towed, I was bracing myself for a bill in the couple hundred dollar range.  (Having AAA, I'm not really sure what towing costs!)  Of course, originally, we were going to have a longer haul, but I still wasn't expecting to get under $150.  But, Steph works in a bank.  She sees people in all kinds of professions.  Including tow truck drivers.  In particular, one from the place we were probably going to call for the 'Cuda.  He says he'll do it for $65!!

In title news:  we were happy to find out that we do not have to get insurance or register the car in order to transfer the title.  That means, for a mere $75 we can officially be owners of the car!

Even more exciting news:  there is a building across the street from where I work.  It was built to be a Circuit City several years ago, but has sat there vacant since the day it was finished.  I heard a rumor a couple weeks ago, and have now seen the banner on the building to confirm the rumor to be an actual truth:  Coming soon- Harbor Freight Tools!!  You mean to tell me, at the precise time we are finally getting to work on the car AND I have a little bit of extra cash, we are getting a major tool store across from where I have to be 5 days a week!!??  Oh my stars!!

And, in TV news:  I am hooked on the Discovery Channel's Fast & Loud.   It's just kind of silly.  I mean, I'm not getting any real car restoration knowledge out of it, since most of what they say means nothing to me, right now; but, it gets me in the mood!
They throw in bits of history about the cars they buy and restore...chat about what they are doing...but, mostly it's just fun to watch.

As promised (well, not promised, but I did mention it in my last post from way-back-when)...
pictures from the ramp demo... 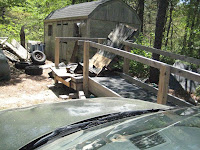 Basically, the Barracuda was parked at the most level part of the driveway (the house is on a hill, the rest of the driveway is at a severe slope); and, then the neighbor boys built the ramp, trapping the car. 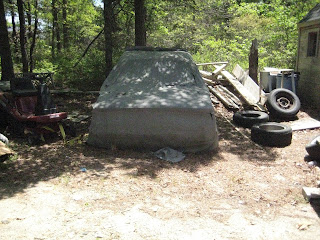