Tuesday, July 11 was finally here...and my stomach was full of butterflies!
My anxiety was at a pretty high level, not really sure how this tow would go.  This poor car had been sitting, waiting for several years...I was at work all day, wondering how I would handle the laughter from the tow truck driver, later that day.
I got out of work at noon, and promptly called my sister, who informed me that her friend would meet us at Dad's between 1 and 1:30.  I raced through traffic to get to Mashpee (10 miles, I'd say...40 minutes!!  At least, that is how I remember it).  Once at Steph's, I impatiently waited for her to gather her things, reminding her to bring the money for the driver.  And then, we were on our way over to the car.  Steph's new house is even closer to Dad's, and we got there in no time...just about 5 minutes to 1.  As I got out of the car, she looks at her keys and says, '[shoot]' (we'll say, 'shoot', since I think my mom is reading this now) 'I forgot the keys!'
No, you don't really need keys to move a car that doesn't run, but she had, for whatever reason, locked the doors the last time we were there.  We were also equipped with the old title, the Voluntary Administrator papers, and a copy of Dad's will and Death Certificate.  The car is no longer registered and she was nervous about that...but, of course, when you have people you know doing stuff for you...it never really matters, we didn't need any of that...we just needed the da..darn keys!
So, I raced back to Steph's as she called her man to see if he knew where the keys were (since they just moved and everything they own is still in boxes all over their new house.
We managed to get back to the house before the driver, even though, at this point I wanted to throw up from the stress of thinking he'd show up, find us not there, and just leave.
But that didn't happen...we made it back...he showed up...and the big move was underway.
(I forgot to get pics/video of the car going onto the flatbed...of course!)
Steph said I look like I was in severe pain, watching.  In my mind I saw the whole rear axle come out from under the car once the winch started pulling.  It was quite a site to see her break free of the dirt and pine needle bed she was slowing sinking into.  I almost wanted to cry.
Just a side note, the driver was pretty impressed by the state of the car.  That made me feel better about our chances of getting her back on the road.  I also found out, that day, that the only time my family ever drove this car was when Steph backed it down the driveway and then back up the hill!  It was towed to dad's and that is where it has stayed all these years!!  So that kind of cancelled out the optimism I got from the driver's comments.  (add to shopping list: more antacids!)
But, without further ado, and pointless yammering...﻿ 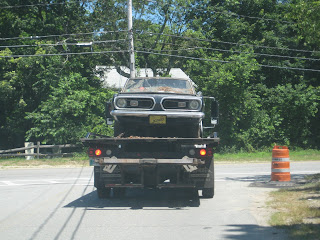 ﻿
He got her up on the flatbed, and we followed her to Steph's. 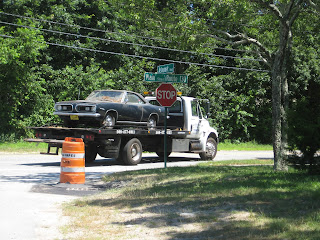 I loved watching her ride away, knowing this was truly the beginning, and we were gonna do this thing!﻿ 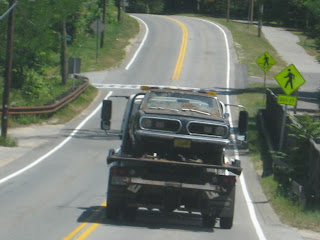 It was a bumpy ride, and I thought she was going to bounce right off the truck!
Steph and I were giddy little girls at this point!  For some reason, when I saw the car bouncing around, I said, 'no, Jo! don't fall off!'  So, she is officially called 'Jo'.  Steph thought I meant 'Jo' from Little Women, which is appropriate.  But, I was actually thinking Jo Polniaczek from The Facts of Life. (There are nine years between my sister and me.)

Steph's new driveway has a slant, but it is also double-wide.  Jo is placed off to the side, and on the most level part.  I would love to hose her down, but all the seals need replacing, so we are holding off for now.  The car cover Steph picked up had clearly been returned once before, and probably put in the wrong box...it was far too short.
My first glance at the engine...﻿ 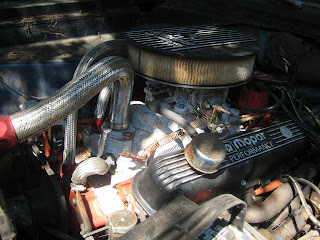 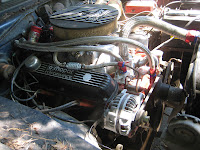 ...which, right now, means nothing to me.
I know my crazy brother wanted a bigger engine in this car, but we are planning on putting it back together with stock parts...the way she was meant to be.  So, somehow, we will be removing this to put the original, smaller engine back in.  Okay, here come the butterflies again...actually, think MOTHRA!  If we can pull this off, it will be the wildest story since...well, the last story of two girls doing something they know nothing about. ﻿
﻿