Warning: this post starts a bit personal; but, I promise pictures and actual 'car talk' at the end.

Here's a little more of my back story.
My family life wasn't full of touchy-feely emotional love-fests.  That's not to say I didn't feel loved, but we didn't show a lot of emotion in my family.  I, of course, felt supported and protected by my family...but, more in the way a growing lion cub might.  Your parents are there to keep you out of trouble to a certain point.  You learn your lessons, because you're on your own next time.
My siblings and I all dealt with our particular brand of family love in different ways.  Without getting into every one's business here, I'll keep it to my own personal issues.  I retreated to my room a lot.  I didn't need people in my life...people complicated things with their own problems that I didn't need on top of my own.  I didn't cry a lot.  I was an emotional wasteland.  When I was in my late teens/early twenties, a friend of mine told me I had 'a heart of stone' because I didn't cry at the Lion King.
Who cares?  How could this possibly have anything to do with the rebuilding of a car?  Well, if I saw that movie today, I would cry from start to finish.  I cry at the drop of a hat.  It's something I'm not proud of.  But here's how it ties in with the car...
I had a bit of a breakdown this week.  I have been chipping away at some cosmetic things.  The latest project was the carpet.  The driver's side carpet is soaked.  The passenger's side seems wet, but it is hard to tell because of the cold.  I attempted to use the shop-vac to dry the carpet: 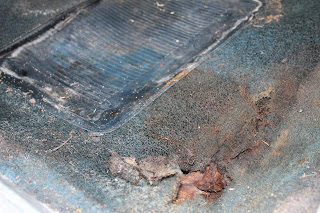 The suction of the vacuum tore the carpet for me.  I had no choice at that point; but, I had been avoiding the inevitable task, anyway. 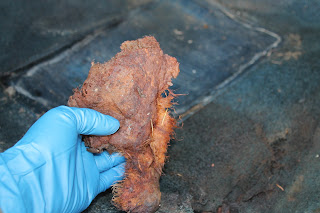 All of the padding had turned into a rusty, soggy mess of floor-rotting goo. 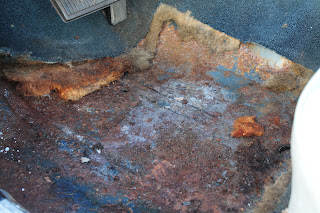 It wasn't as warm as earlier days, and my emotional state was pretty delicate at that point, so all I could manage was the worst part of the carpet.  I wasn't really prepared for the severity of the rust.  I knew it was bad, but it just went on forever!  My fingers had become numb, so I just cut out the wet part, to go back later and do a proper job of getting all the carpet out.  When I decided I would take care of the rest later, I moved over to the passenger's side just to make sure that side could wait.
I saw this: 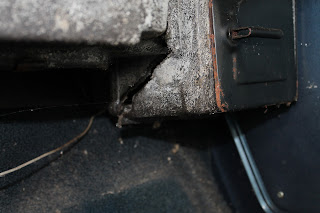 From reading another blog (Mopar Motorhead's post about rebuilding his own 1964 Barracuda's heater) I was taught that this is the fresh air inlet (passenger's side).  It's cracked!  Luckily, I can use this other blog as reference...Thank you, Mopar Motorhead!

But here's the trouble...the numerous leaks I've discovered, the leaks I've found after thinking I've fixed the problem, the rust...oh, my! the rust!, the cracks, the tears...it's all getting to be a bit much when you consider I haven't even done anything with the engine.  Actually, parts have been taken out...nothing going back in!
I have pretty much been abandoned by the person who (seemingly) wanted this more than anything.  I was feeling alone and defeated.  What was I thinking?  How am I, a girl with no knowledge of cars, going to fix this rusted mess of what used to be a car?
I sent my brother a text asking his opinion, telling him I felt abandoned and depressed.  He said: sell it.  He also offered, and not to be mean, I obviously had felt the same way more than once: don't take this the wrong way, but I thought you two were getting in over your heads.  He is his father's son...before passing away, those were some of Dad's last words...only without the 'don't take this the wrong way' part!  But after some texts back and forth (I think he was at work and I HATE talking on the phone...texting is the best thing to ever happen for the socially and emotionally detached!) I simply asked if he would still help me out, talk me through stuff if I called.  He said 'of course' and that he would still like to do any body work.  I felt better.
After a long day of talking myself into and out of and back into sticking with this project, Jason came home and handed me a piece of paper he found stuck in our door: 'If you want to sell your Ply Barracuda Give a call...'
But I had already made up my mind for sure, at that point.  I entered into this project knowing it was going to be difficult, having no idea what I was doing.  I knew I was going to have to be the driving force behind the whole thing, but I can't just give up after replacing a couple seals and tearing up a bit of carpet!  I haven't even started to learn about how the engine works!  That's the part I am looking forward to!  That's the whole point!
And I know I always have the support of my friends.
So, after a long emotional day, I've decided to stick with it.  I've abandoned any type of time table for finishing it, though.  I think, with the cold weather coming, we're looking to get moving again in the Spring and see how things go from there.  I don't care what it looks like when it's running...I just want to hear it start!