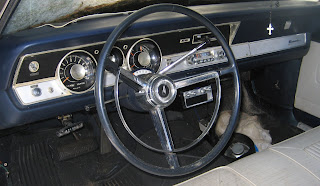 This is the beginning of a strange adventure. My younger sister and I will attempt to restore a 1967 Plymouth Barracuda that our father had bought for her a few years ago. I was not included in the original project. There’s no bad blood because of it. I am not really sure why Dad bought the car in the first place. It is my understanding that he wanted to bond with Steph, and this was something they could share. But then, our older brother got involved and 3 hot-tempered Polacks should never get involved in anything without supervision! And so, after some alterations, the car sat. Without any love. Without so much as enough respect for someone to put a tarp over it. Poor car.
So now, several years later, I have quit a job I hated and have way too much time for thinking. Of the things I think about, my ailing father and that lonely car are at the top of the list. Here’s Dad’s situation: he’s ill. Steph spends the most time with him, as she is responsible for him. Mom moved after their recent divorce and he is alone in their house. He is bound to a wheelchair due to problems with his feet and his near-blindness (he has something like 20% sight). He goes to dialysis 3 times a week and his ‘friends’ are the multitude of nurses he sees on a regular basis. These are complications due to diabetes and, apparently, his exposure to Agent Orange while in Vietnam.
Here’s the twist of this ‘adventure’: he’s our car guru, our sage advisor, our reference book! Yes, this will be an adventure, for sure. Steph has put some sweat into this car already. Brother has apparently replaced the original engine with a much larger engine, which we are, as of now, not sure will fit under the hood. My look at the car has been limited. It is covered with snow. I can see the hood is not closed (which is how I found out about the new bigger engine). I can see the seals around the windows need replacing and it will need 4 new tires. I’ve been told the brakes need to be replaced and the shocks need new springs or something to that affect. And the best part is that it is, right now, on a slight incline, boxed in by the trees of the back yard, the shed to the right, and our dad’s new wheelchair ramp directly behind. This is not going to be easy.
Whatever work Steph has already done, she will have to tell us, because as I said, I was not originally included in the project. This time around it was my idea that she and I try to give this beauty the life it deserves. Well…to give it life, anyway. I only hope we can do it justice!
What are our qualifications? I have none; she has done some work on it.
How do we expect to fix a car with no knowledge of cars? We have dad!
I don’t know much about cars, but growing up I was exposed to the AIR of car repair. The house was littered with Chilton reference manuals, race car magazines, and even NASCAR ALBUMS! If there wasn’t a race on TV, he could LISTEN to old races on vinyl.
My memories growing up included my mother’s baby blue ‘65 Mustang with the white leather interior. Her first car. It was a thing of beauty, and my father refused to get rid of it for many years, though I don’t remember it running past my 6th or 7th birthday. And there was Dad’s own ‘67 Barracuda fastback (dark green with black interior) that we would watch him race at the local drag strip. I have two specific memories of this car. The first was going to school and bragging to the boy that I had a crush on that ‘my daddy beat your daddy at the race yesterday!’ I think it was first grade. And in direct opposition to this memory was the day he drove us to school in that car. I was mortified when he drove up the bus lane! “Busses Only, Dad!!” That may have been third grade. Once it stopped running, it became a sad pile of car that slowly started losing parts, starting with the front side panels. I believe my father stopped being happy the day he could no longer drive that car.
So, I guess it is my father’s love of cars that I have inherited; but, also my odd desire to pay homage to him and HIS love of cars that drove me to suggest that little sister and I try to get that thing running. And I have to say, as of now we have not (well, I have not) put any work into this, but I am already looking at others’ classic cars…and I want another!! 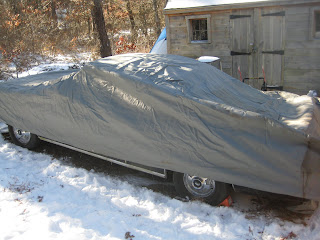 So, until the Spring thaw, this is how 'BABE the blue Barracuda' shall bide her time.
Stay tuned for the crazy adventures that are sure to come!