can't get to work today

well, it hasn't been a full month since my last post, but it's been awhile.
why? you ask...(or, probably you didn't)
anxiety, i guess. i throw around the word 'lazy' a lot, when i talk about myself. not lazy, like i don't do a lot; but, lazy in the sense that it takes a lot for me to really get going with something. i mean, i've had this car for nearly 4 years now. originally i was simply waiting for the cash to come in (my tiny $3000 budget came from a court case my dad was involved in before he passed away, and i had that money ...not actually knowing how much was coming in...earmarked for this project), and that check arrived just this past year. so no more excuses. except, well, winter and anxiety.
and when winter came in like a lamb, with all the warm 45-50 degree days and snow not starting until late January/early February, i had no more excuses to not get the project going again.
but, oh my, is it overwhelming spending the kind of dough it takes to restore a car. I mean, if i was handed a car that just needed new brakes, or just needed some engine work, or just needed some body work...all of those things are projects, but put them all together and it's a huge deal for someone who has never done more than change a tire, do an oil change, and replace her brake pads!

and here i sit, home from work, because my daily driver has a battery that has decided it will not start on this -4 degree morning. i'm thinking a portable battery charger should be on my next shopping list.

so why post today?
well, i've pulled the trigger on ordering parts.
i have pages of notes and measurements and price comparisons and lists of websites.
i've had several websites with saved carts and wish lists, just wondering 'is this the right part for this car? will it match up with these other parts from this other store?'
in the end, i think i spent a little extra just to get full systems from one place, to ensure (hopefully) that everything fits together with little fuss.

packages have started arriving. i got 3 boxes from rockauto on Friday and 2 of my packages from doctor diff arrived yesterday. poor mailman...'this one's heavy' ...they're all heavy! it's rotors and control arms. and there's more coming next week. 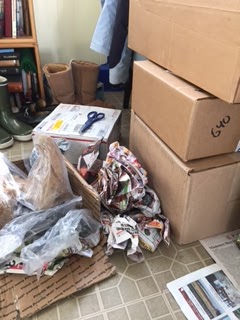 and it's not all shopping, i've been up to. (for the record, i hate shopping, in general, so this is just torture, not really knowing what i'm doing)
as i said, we've had some nice warm-ish weather, before this -4 craziness that seemed to come out of nowhere. even the snow days we've had have been nice and quick and followed by sunshine and melting.
so on those warmer days, i've been trying to get the car ready to have stuff put back on.
i spent some time struggling to get the leaf spring shackles off the car. don't you love it when you can get 3 of 4 bolts out and then everything just comes to a halt while you wait for the WD40 to do it's trick? or when you get 7 of 8 broken U-bolts out of the rear shock plates and have to go buy a new tool to cut the last one off because last time you had to cut metal you had to borrow your friend's dad's sawzall and didn't want to bother for just one bolt? no? that's just me? hhhmmm....
at any rate, i'm making some progress: getting parts off, cleaning re-usable parts up, ordering new parts...
specifically, i finally tackled the front brake removal, in anticipation of finally ordering that front drum to disc conversion kit (yep, i did it...i spent a third of my budget on the brakes and some suspension parts...good thing i already decided the body will just stay as it is, because i just got news that there is some engine work to be done, in the form of new cams...lord help me)

okay! let's get those drums off! i knew they would not just slide off, so i immediately got to work loosening the shoes, by way of the adjuster. (let me just say right now, the youtube channel 'AutoRestoMod' has been a huge help! my friend Pat and my brother are always quick to help, but when i can see it done, and then just try to follow a video...it calms my nerves a little more)
then, i thought...'um, which way am i actually supposed to be moving this thing?'
back on the internet, i realize i've been spinning the adjuster the wrong way. oops. back out to the brakes, i get back to work on the passenger's side, and suddenly, the drum spins! success!! off come all the bits and i'm ready to move onto the driver's side.

now, the driver's side just wouldn't cooperate. because, as usual, this car gives me a false sense of hope, by allowing me to breeze through the beginning of a project, only to seize up, when i move onto the next stage. but, come on...i've never heard of an easy and quick restoration project.
so, onto the driver's side, where i spin that adjuster wheel until it just won't move any more. yet, neither will the drum. so i sit. staring at the drum. asking 'why won't you just come off!!!???' on the verge of tears, because, well, let's not forget, i'm still a girl trying to do something i've never done before...and a very impatient girl, at that!
well, i'll just have to get the hammer out. eventually, after some knocking, it finally budged...ever so slightly. i'd say 15 minutes of banging on the drum (delicately, of course), and using all my might to wiggle and pull, it finally came off! full of old spider houses.
the shoes looked, except for the rust, brand new. i just found out, when my brother asked why i bought new drums, that the brakes were all done new just before dad bought the car...10 years ago? 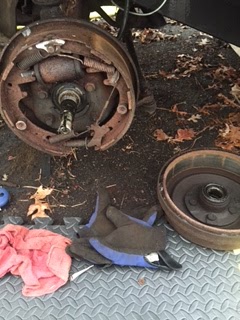 after the struggle with the brakes, i was too nervous to put much more time into getting more parts off the front suspension. not to mention daylight was running out and i still had other things to do.

i still need to get out and clean up that rear axle, and open it up to put the new differential gasket on.
i have all new brake lines coming in...probably more than i need, but i'd rather have extra parts than not enough. I was ready to order a new gas tank, strap, sending unit, lines, and all that jazz (to have it when i'm ready for that step), but once again, they want to know what size and i have no idea. so back out to measure, at some point, to make sure i get the right size fuel lines. so i decided that could wait. i'll concentrate on the brake conversion and suspension for now. that's about all i can think about.
well...i'm thinking about this now, too...

this is a massive hole in the chassis...right behind the rear axle 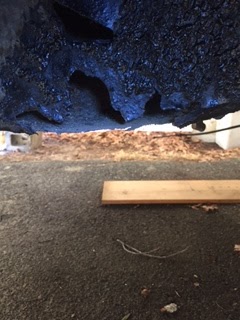 this is what fell out, when i dug around with the end of the screwdriver...
sand and insulation and acorns and rust bits...
and that's just the stuff i could reach. 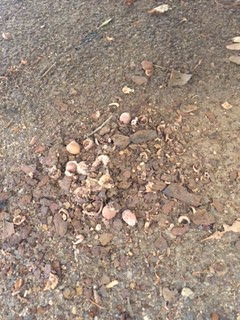 with any luck, i'll have a post with new stuff going on the car soon. my friend is hopefully coming over next weekend to help me out again, so we'll see what we can do!