A death and a birth

Sadly, this post was prompted by the death of our father.
After a series of major illnesses and surgeries, he passed away in his sleep a few days ago.
My siblings and I have been cleaning out his house over the past few days. It was not a secret that my father loved cars...and everything about them.
Out of high school, he joined the army and learned vehicle repair. From the Army, he came home and continued to surround himself with cars by drag racing; and, eventually, working as an engineer in the auto industry.
In sifting through his belongings, it was clear that cars were his 'one true love'.
He had albums. Sure, albums of car-inspired songs from the '60's seems normal; but, albums of actual car races!? I remember him listening to those albums...just the sound of engines and commentators.
There are boxes of car photos. I believe, living in Detroit, he probably attended the auto show every year...judging by the pictures I've found so far, he was there at least every year he attended high school. 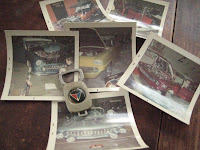 Here are a few from 1968 or 1969.
I also found an awesome old Plymouth key chain that we can use for our 'Cuda keys! I suspect it was from his own Barracuda that he drove when I was very young. 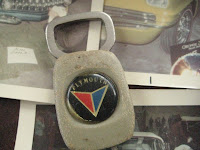 We have uncovered stacks and stacks of Mopar and Nascar magazines, Jeggs and other parts catalogs. I've yet to find his old Chilton manuals, but we have found other auto manuals.
He did leave the car to Steph and me. I am overwhelmed at the thought of having to do this project, even after his death. What started as a gift from a father to his daughter, turned into a way for two daughters to bond with him. That, in the true fashion of our family, turned into a sore subject, to be pushed aside and forgotten altogether. It is my belief that it was too hard, emotionally, for him to try to help from the sidelines.
It took a tragedy to re-visit it, and now, it will simply be a way for a couple of sisters to honor their father.
I hope we can do it. I hope, in the end, it doesn't just end up being a junky piece of metal that we are stuck with. We want to fix this car and take it out and tell the story of our father, and his love of the automobile.