I've been working, I swear!

I've been getting a few things done, here and there. A friend told me about another blog 'venue' where you can actually get paid in cryptocurrency, for posting, so I've been putting my blogging energy in there, since I definitely don't have the time for double blogging. ( You can check it out here, if you want, but it's not just car blogging and I'm about to give you the abridged version of what I've been doing since the weather has turned from winter, to spring and to now, the first day of summer.)

Let's see, the last post was about how winter was cold and windy, though not terribly snowy overall. I had purchased a gator grip socket to try to get the fuel cap, and subsequently the filler neck, out of the car to make putting the new tank in a little easier.
That didn't work, so I decided to just struggle with it, with the filler neck still in.
Unfortunately, that plan didn't work, as i couldn't get the pipe to line up with the hole in the tank. It's just me, mind you, with the tank on a plank of wood, using a jack to raise the tank into place.
It was not working out.
I abandoned the fuel tank so that I could just bite the bullet and order the proper socket for the security screws and just take the neck out and do it right. 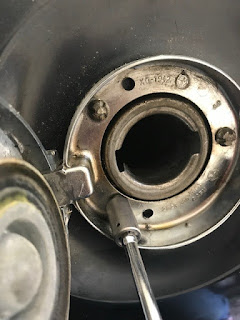 I did have to use a flathead screwdriver and a hammer to loosen the screws anyway, though, thinking 'why didn't I just do that in the first place!?' but also decided that eventually the screws would have to go back in and the socket would come in handy for that. 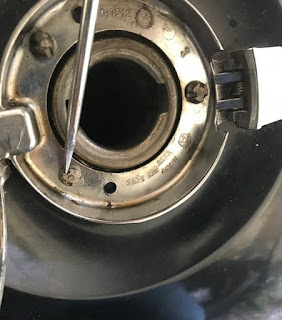 So, again...raising the tank alone was just not working out. In the meantime, I also decided that I'd just go ahead and order a new collar for the filler neck to replace the cracked one I had. (not sure it's called a collar, but it's the part that seals the trunk where the filler neck goes through the trunk floor and into the fuel tank)
That should be here Saturday, and Hubby has agreed to help me raise the trunk since I have admitted I have too short a wingspan and/or not enough limbs to do it alone.

Besides that nonsense going on, I had a bit of a struggle with the rear brakes. It has been years since disassembling them and I had not taken (or could not find) very good pictures of the process. YouTube, my manual, and whatever pics I could find on the internet were the best I could do.

After stretching the whole process over a few weeks of working on my days off, I managed. Barely.
And there's some rubbing at the top of the shoes on both driver's side and passenger's side. I've not put the new drums on yet, and they seem to be quite a bit bigger (deeper) than the old ones, so I'm not entirely sure I won't just be using the old drums after all that.

Once I finally finished up the rear brakes, though, and hooked the brake pedal to the master cylinder push rod, I thought 'yes! the brakes are done!'...
...but I haven't even started the front disc conversion. I've finally got all the new knuckles and suspension pretty much squared away (I think...I hope), but the brake conversion is still in boxes.
And then the anxiety of that set in.

But that's where we are now.
Hoping to button up the fuel tank, and basically the rear end of the car so I can move up to the front brakes...
And after that, I start playing with the heart. The engine. The real test of the whole project. 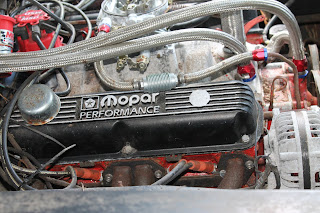