So here we are a week+ into August!
Looks like my plan to get the car back to 'wheels down' by labor day may not happen. It may still, but I'm not holding myself to that. September still offers lovely outdoor weather, but that is the time my in-laws are in town, meaning it's all work and in-laws all the time. This year, however, we've planned our (usually in October) vacation for the second week they are here, so that's a week I won't even be in the country.
But that's okay! I'm really close to being ready to start looking into what's going on with the engine!

Let's see...where did we leave off...
Oh, right...the broken, brand new, fuel line. Which, I'll be honest, I think turned out to be a blessing in disguise. Rather than fighting to fit a line that is obviously too long for this car, I can just put a tiny bit of fuel hose in place of the cut out section and it'll be great. Of course, I actually have to get under there and do that...
I finally got the jack out so I could position the fuel tank to drill the hole for the tank strap bolt.
Let me just remind this tiny world of Barracuda Diaries readers that metal work scares me. I don't like drilling metal. I don't like cutting wheels on metal. I have such a desire to learn welding but fusing metals scares me (though this is the least of my metal aversions).
When a drill bit gets stuck as I'm drilling...I panic a little.
My brother has a massive scar on his face from a flying cutting wheel from a grinder.
Let me also just give you a little background to my odd trauma visions: every time I drive over a railroad track, I imagine a train plowing right into me. My imagination is both wonderful and wonderfully disturbing.
But back to today's work!

You may remember (or maybe not, since this has been going on for years. so many years) that there was some rust that needed repair on the chassis. The rear passengers side frame had rusted out, you guessed it, at the fuel tank bolt hole. Most likely from the hole in the trunk channel, since it's also where the major damage is to the trunk. My wonderful friend, Patrick, welded a patch for me. Unfortunately, the damage + the new patch left me with no place to attach the bolted end of my fuel tank strap. I've been putting off drilling a new hole.
A) because it was quite an ordeal to get that patch on there, since the sheet metal I had was way too thick so cutting and bending and welding was a pain in the ass for my friend...I didn't want to mess that up!
B) because I had to get it right the first time. I couldn't be drilling holes all over until I finally got it right! I'm a lazy measurer. 'Measure twice, cut once' has always been in my head, but quickly followed by 'just hurry up...it'll be close enough.'
C) drilling metal...ugh! 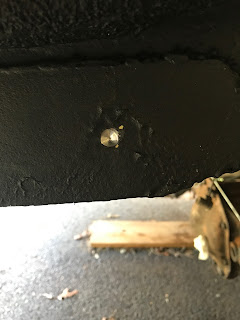 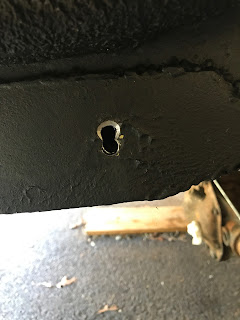 At first I thought maybe I didn't get the right drill bits (yes, I had to get new bits, as I didn't have one big enough for the larger hole I needed to make). It was so slow going. I actually took a screwdriver and hammered it in after a long time drilling with almost no visible progress, just to see if the metal was indeed getting thinner. It was...so I proceeded. And when I finally got through the patch metal...I had the original layer of metal to go through!!
WHAT!?
But then I was in my groove and settled down from my metal drilling anxiety. Unfortunately my legs were falling asleep and I was just beginning.
So the J-hook I have to hang my tank strap is the kind that goes in a large hole then settles into a smaller slot. That meant drilling a larger hole above the smaller hole.
At this stage, where I'm becoming more confident in my drilling skills, the larger bit kept getting stuck. So, of course, I had to do some problem solving for a problem I was not terribly accustomed to.
The old me: throw the drill and all the bits. slam my head against the rear quarter panel. cry. pack up until my next day off.
The new and improved me: think about why the bit is getting stuck. look at the tools at my disposal. grab a smaller drill bit and gradually increase my bit size.
However, even the new me has a breaking point and after so much drilling, with numb legs and arms that were also slowly going numb...I stopped before finishing the larger hole. But it's nearly finished and it's not a nagging issue that will continue to cause undue anxiety.

The bolt hole was actually my second task today.
Today's list started with the super annoying task of cutting the headers out. Silly me, I thought I could just unbolt them and pull them up and out...throw in the old exhaust manifolds and be ready to hook up a new exhaust system!
WRONG.
Those fracking things are jammed in there. Well, I thought, looking at it, that the passengers side just needed one of the pipes cut off, because it was getting caught on the torsion bar.
After what seemed like an eternity of sawing with my mini hack (see above statement about cutting wheels and grinders), I finally had that pipe cut! Bolts back out and...
STILL STUCK!
Problem solving mode...seemed like I could just cut the opposite pipe out and the other, middle, two should be good to just slide out.
NOPE!
So basically all the pipes need to be cut off up by the intake manifold.
And all of this was AFTER a day of just trying to get the bolts out! I am continually puzzled by how this car was put together in the first place!! I mean, the headers weren't original equipment on this car. Someone put those in aftermarket and they are jammed in there!! 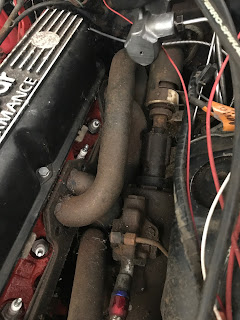 Can you see how tight that is in there!? The pipes are molded to fit around the steering column!! That is going to be such a pain to get out...I'm gonna have to have some major reward ready for the day I tackle that mess! 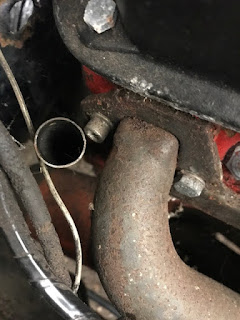 And the simple act of removing some bolts is made nearly impossible by the oil dipstick do-hickey being so close that I had to wedge the Allen wrench at an angle that allowed me to push a nearly immovable tube out of my way. Then I get to do it all over when I put the original manifolds back in. Yeah.

But today I put in a solid 3 hours (the most I've been able to manage yet) and I feel like I did quite a bit to move forward. 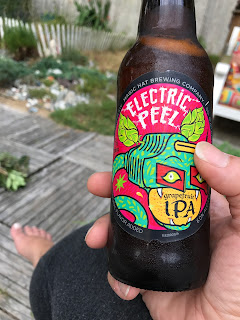 So I rewarded myself with a lunchtime beer!