The struggle continues. On and on I go, just hoping that the daily task I have set for myself goes off without (too much of) a hitch.

The latest issue: bump stops.
BUMP STOPS!!!
the silly little rubber bumpers that keep the upper control arms up and away from other metal parts as the car hits all the bumps in the road.
A bit of rubber on a bolt that is screwed into place.
That's it! It's a rubber topped screw.

The task: unscrew old bump stops, screw in new bump stops.
WOW! That'll be easy. Probably a little (a lot) rusty, but I'll just douse it with PB Blaster and use the impact wrench on it.
OOPS...not enough clearance for the wrench...or the wrench, socket and hinged adapter.
Breaker bar? NOPE...so here we go with the smallest wrench and socket I have...and after hours of struggle...I mean, ab wrenching and shoulder pulling struggle...nothing.

NOTHING!
How can these things not be moving AT ALL!?
I'm getting better at holding back the tears. I'll get a cutting blade for my 8-in-1 multi-tool thingamajig and try again.

Fast forwarding: metal cutter in hand, eye protection on, footing as secure as i can get it (well, not really 'footing' since everything I do with this car I'm either lying on the ground or kneeling until my legs go numb)...
After just a few seconds of using this tool, I can tell it is not going to work. The intense vibration has my hands going as numb as my legs and my brain telling me that this will only end badly, if I continue to attempt this.
So, I give up again. As I think about my problem, I remember that I am not opposed to more elbow grease if that's what it takes. People may think my way tends to be more labor intensive, but if I can get the job done with less fretting that I may slip and cut my hand off, it's worth it to me.


My solution: get thee a hacksaw! 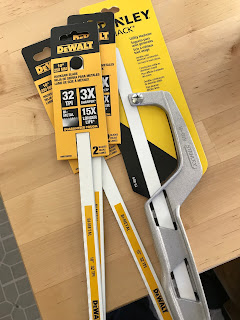 I put it in my head that, no matter how crowded Home Depot was going to be on a sunny day after 2 weeks of rain, I was going to stand in line and buy my $10 mini hacksaw.
The true victory was actually going home and USING the saw, rather than waiting another week.
But as with most days working on this car, the joy from this victory was short-lived.
After a lot of work without much pay-off, it didn't seem like the saw was cutting the bolt at all. 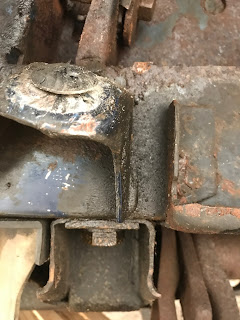 Though to look at it, and the relation of the blade to the placement of the screw, it had to be going through...so I continued on.
Finally, after a pretty intense upper body workout, That disc popped right off! 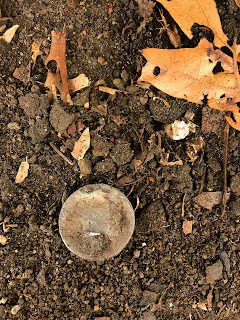 And I was faced with another 'haha, you suck at this' slap in the face from this car that I can only assume, at this point, is haunted by some asshole spirit that likes to watch me beat my head against the car window and pretend to smash it to bits with a hammer... 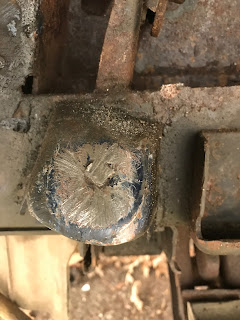 A square hole, with a square bolt that has been tightened beyond it's proper position.

Seriously...is this whole thing a freaking joke? Well, universe? Is it?
What could I do, but move on to the passengers side, leaving this bolt stuck. I did not have the wits to figure this problem out, at that time. It looked as if it had been welded in, and the fact that I was unable to get it to budge at all, it's truly what I thought.
The passenger's side bolt actually had some movement to it, I was just not able to get the nut off the bolt. 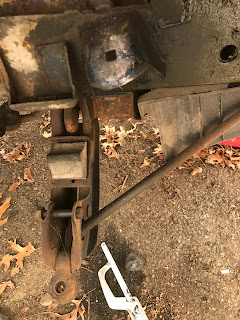 That went much more smoothly and I was beyond excited to just get it out and move on to try to solve the problem of the driver's side fiasco.
That all happened on Monday...with my day off just around the corner, I made up my mind to get that bolt out on Wednesday (today).
More PB Blaster...sledgehammer and a big metal punch we had lying around from some other random project...flat head screwdriver-as-chisel...and more sledgehammering.
My god I pounded on that thing...I cursed the car, per usual...I fake cried (because the tears just don't come anymore)...then I gathered my strength to go at it all again. Staring and wondering how it could be that this fucking thing won't budge!!??
Out comes the drill. That's no help, because I'm not really sure, at that point, what or where I should be drilling.
So I chisel away at the parts that I think will help relieve that tight grip of a diamond in a square.
Finally, I could see the PB Blaster shooting up through the bolt hole...I thought 'why not give that little socket wrench one more try?'
Oh sweet merciful whatever, it moved...but not straight...so it was simply stuck in a different position.
So I go through all the usual quips: 'really!?' 'are you fucking kidding me?' 'this is SO my life'...
A little more wiggling and another smack with the hammer and it's out.
JUST LIKE THAT. EASY AS PIE.(*sarcasm*) 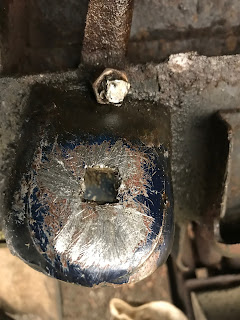 Mangled and shiny.
The best part: I'm too nervous to check but, to my memory, my new bump stops are not square at the base. We shall see soon enough, though.

The light at the end of this tunnel that took me several hours over the course of many weeks to get through:
Parts can start going back on!
We're not done yet and I think the real fun is about to begin.