This exciting project...this 'step outside my comfort zone' experiment...this test of patience...this 'I said I'll do it, so I'll do it' game I'm playing is really starting to feel a little 'Groundhog's Day'-ish. If Bill Murray showed up at some point, for some comic relief, it might make the adventure a little less tearful. On the upside, there's no one around to witness the meltdowns I have EVERY.SINGLE.TIME I work on the car.
Today's awesome fun time task: start taking those shocks and front brakes apart!
Well, after probably 30 minutes of 'how the hell am I going to get these damn shocks out!' Crying. Whimpering. Begging for some sort of 'ah-ha' moment to hit me. Hammer, mallet, screwdrivers, clamps, lots and lots of PB Blaster...and only my breaker bar to help with the shock nut because I don't have deep sockets for my impact wrench. whomp whomp.
This is what I ended up with before I gave up and moved onto the bottom bolt (hoping maybe somehow that would help with the top one, though, truly I knew it wouldn't)... 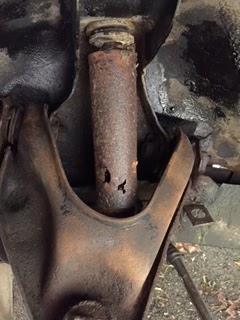 ...all I managed to do was bend and mangle the shock! Vice grips...clamps...my own hand...nothing would hold the shock still while I worked on getting the nut off.
So, onto the next phase.

I actually started to make some real progress with the brake parts! With the exception of a few whiny 'why won't you just come off!?' and 'how am I gonna get the impact wrench in that tight space?!' I was taking cotter pins out and nuts off and bolts out...
Things were starting to turn for me!
I managed to get the steering knuckle out of the way so that I could get the knuckle arm off... 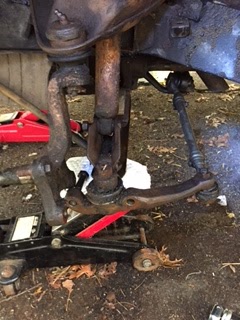 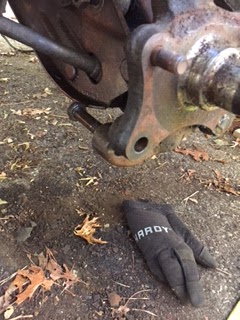 ...except, I still haven't gotten that done. I can't seem to get the arm off the tie rod end (nut is off...the bolt just doesn't want to come out). I've tried banging it through with a mallet. I've tried my pickle fork. I was going to try the pitman arm tool, but it's too big to fit around the end.
So I moved on to the seal at the top of the arm...same deal! 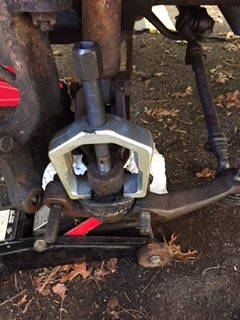 Here, I could actually use the pitman arm tool, but it did nothing. Perhaps I have to take the jack out from under the lower control arm? Maybe I'm not getting the proper leverage?
At any rate, as with every 'go' at the car, the day has ended with another shopping list. 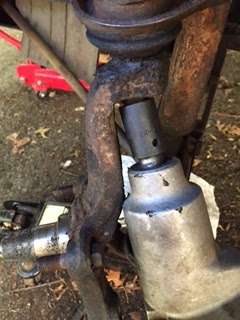 I should already have a set, but I don't...and I think it would've made the day go much more smoothly if I had a set of deep impact sockets. Both for this bolt holding the steering knuckle to the upper ball joint, and for that wretched shock bolt.
I think the most frustrating part of this project is that the little things that I think are going to be quick and easy 'and I can just move right on to the next thing' end up being the worst!! Nothing ruins my day like a stuck bolt! (okay, there are a ton of worse scenarios that can ruin my day.) Such a simple little thing, stuck, and putting the whole rest of the day's list on hold!
Stupid rusty bolts.
Now...off to do some shopping...