what do we know?
well, i have my conversion kit. parts in boxes just waiting to be put on the car. those boxes are slowly being emptied. and i do mean S.L.O.W.L.Y.
that's okay...i mean, who ever restored a car, one that had been sitting for 10 or so years, in a weekend?! nobody, that's who! and after years of sitting...3 of those years, in my own yard!...who am i to think it would go any faster?
honestly, i'm already impressed with what i've been able to do. it may not seem like much to a car person, but to me, it's something.
consider this: 2 days ago, i couldn't get anything to work out. literally wanted to just smash the thing into bits so i could at least get the pleasure of hearing glass break.
but i just stepped away and decided to just try again the next day...maybe something would come to me in a dream.
not a dream, exactly but i did have some time to think things through a little...you know, without actually also trying to do stuff, and i came up with a way to simplify one of my problems!

(i think i've strayed a little from my original thought, here...)
back to the beginning...we know i have parts and that some parts are getting back on the car. we know i have run the brake lines but not very well. we know i have the old master cylinder out, but that there is a slight problem with the new master cylinder and the adapter fitting into the old slot. (this is where my little daydream comes in...more on that later.) we know (i think i mentioned it? maybe not) that the e-brake cables were giving me some trouble. in fact, i tried to finish getting them out yesterday (when i had my meltdown) and had to do more wire cutting in order to finally get the cable out. what a pain!! again, after walking away from a project i knew i would not finish, being as frustrated as i was, i went back out today and managed to move a little further with that task. the main cable is in, but i had reached my breaking point again, and left it to be re-connected to the handle and secondary brake lines later.

yes, there is a pattern of frustration. i am a person who can not figure out why i can't do something. what makes some tasks just seem so impossible? other people do it...where am i lacking? what am i missing?
stepping back gives me some time to think...
think, 'yes, it's true. other people CAN do this. and so can you...it will just take you a little longer to figure it out...you'll have to ask more questions...you'll have to make more mistakes...you'll have accept that you don't know the shortcuts or tricks that will allow you to get brake lines run in a few hours.'

and so after i talk myself down off the ledge, i give it another go...
here's what i've been working on, and continue to struggle with, at the moment:
1. brake lines: finessing and getting them to lay smoothly and get back in their retainer clips
2. master cylinder: figuring out the best way to get the new one in so i can finish the damn brake lines
3. rear axle: getting the differential cover back on (yes! i finally found a new one!) and changing out the axle flange gaskets so i can finish the damn brake lines and get the rear axle back on the car
4. freaking leaf springs: ugh...i don't want to talk about those right now...

here's what i'm talking about with the master cylinder issue....making this template, to have a better view of what needed to be done, was what my 'dream' was about: 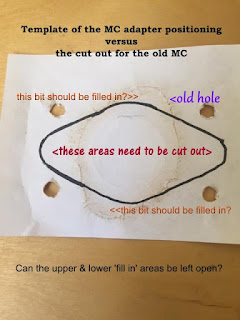 as you can see, the dark black line is the shape that should fit into the hole where the old master cylinder came out. however, the actual hole where the MC came out is the more faint 'rust' outline. i'm thinking i could just get some snips and cut out the bits to open the hole to fit the adapter in. but then the upper and lower bits would still be open, but COVERED by the adapter, once the whole thing is installed. would that matter? would a couple little gaps make any difference...maybe in the stabilization of the MC...but, wouldn't those four bolts hold it tight and in place? (these are the things i just wish i knew...or could figure out...)

and, i really did have more trouble with the brake lines! specifically the e-brake cable. after my friend cut the secondary lines off, i went to work getting the main cable out. sure...just unbolt it from the lever...pull it out and through, and put the new one in! well, great...if the back connection isn't practically welded to the frame! 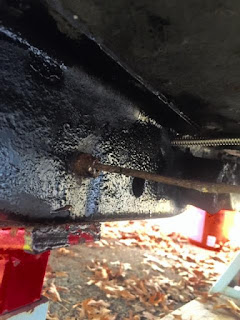 i ended up cutting that line...oh, so much work! and, of course, after the struggle, all the little wires were all spread out, making pulling the cable through the housing pretty difficult. once i had that stuck bit exposed...i hit it with a hammer. sheer joy washed over me when that thing popped out the other end! the struggle wasn't over there, but eventually i got the whole thing out...and the new line in, but not at all connected to anything.

the rear differential cover is on it's way from the other coast. in the meantime, it is my plan to rent the slide hammer from AutoZone tomorrow and get the rest of the axle work wrapped up so i can just put the new cover on and be ready to put it back on the car.
which leads me to the leaf springs. pretty sure i finally have everything i need for that, but i really need to get one thing finished before i open that can of worms...but by the end of the week i should be getting that set up and ready.
and the weather is still not all that great, yet! we haven't really hit 50 degrees yet and the wind makes working outside the carport pretty awful.

oh...but maybe i should getting my fuel lines and system ready to work on!? time to get the credit card out again, i guess.