First of all...
There are never any Barracudas at the car shows out here. 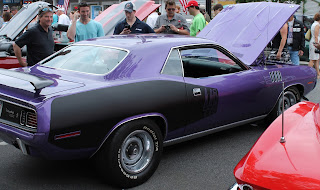 Except this one, apparently?

I've only been to a couple car shows out here, on Cape Cod.  And, really, it's been since we inherited our '67, that I felt drawn to them.  I have never seen another Barracuda, though.  Lots of Mustangs and Camaros (oh, why am I so drawn to those Bitchin' Camaros? Is it just residual from my Dead Milkmen phase?).  Lots of Thunderbirds and Caddies.  It kind of got the the point where I felt like I was in an endless loop of the same 5 cars.
Well, this was the 12th Annual Father's Day car show.  Main Street, Hyannis, is blocked off and it's just lined with classic cars on Father's Day.  It's a pretty big deal around here, and this is the first time I've gone.  I know we always talked about taking our dad, but I think his anxiety was always too much of an issue.  Take away the crowd, and he would've loved it.
(I'm off track again!)
Since this is a big show, we did happen upon not one, but TWO, Barracudas!  The one in the picture is a '71...huge difference from the early version we have!  And, to be honest, not my cup of tea.  Even though it's early '70's (and the other one we saw was a '70...Pink Panther Pink!), you can tell it's from the '70's...for some reason, that bothers me.  Maybe because they look like they can only be driven by grease-balls with mustaches?  I don't like their style, I guess.  And I'm pretty sure the guy in the picture heard me say, 'Mine is so much cooler than this one!'...judging by the look on his face.  I kind of wish there would be a cleaned up version of my car at one of these shows.  I guess Cape Cod will just have to wait for me to step into the ring with mine!

That's not all to say I didn't have a good time...I did!  If for nothing else, than to see what a clean engine looks like! 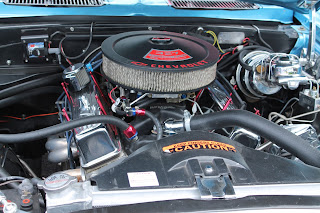 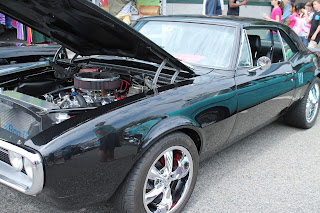 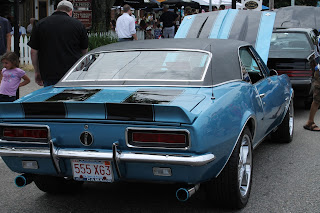 Two of my faves from the show... 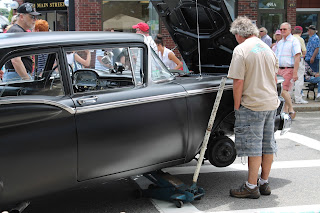 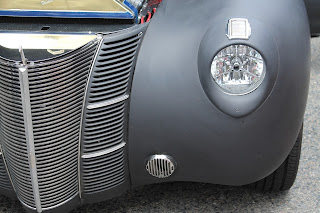 There was a handful of cool older cars, too.

It was good for me to go, look at some cars, and remind myself that, under that grey sheet outside my window, is a car I said I would restore...so I'd better get to it!