Class #3: A hard time getting started

I didn't want to go to class this week.  There was no good reason for it, I just didn't want to go.  The weather had turned, again, and after last week's driving rains, I just didn't want to drive to Bourne in the cold rain again.  The day had started as freezing rain, and so from the very start of my day, I just wanted to get back home and snuggle back into bed.  I'm ready for Spring to truly arrive.
But then I began to think about class.  The plan was to work on a wheel bearing that would probably take all 3 hours of class.  I had just had my front driver's side bearing replaced (yes, I paid for someone else to do something I was about to learn to do myself)...I was getting nervous driving on it, and knew I could not wait one more week, and certainly not two.  But, nevertheless, I wanted to see the process.
When I got to class this week there was a stranger there...a guy who had previously taken the course, but was there to do his oil change.  Mr. Dryz asked if I'd like to help him, so I did.  If you'll remember from last week, I've unofficially been designated 'the brute' of the class (something I'm honestly not upset about).  As we lowered the car, Dan (Mr. Dryz) asked, 'who tightened the new filter?' and looked at me and smiled.  'Don't worry, I checked it!'

Apparently, we were not all going to crowd around the Saturn to do the wheel bearing.  Another student had brought parts to do his back drum brakes.  The evening took a humorous turn (because none of it had to do with my car) when the two guys working on the Saturn started banging on the rusty rotor to get it off the car.  And while they did that, I tried helping Josh get his drum off...which was also rusted to his car.  Everything was rusted together.  To make a 3 hour story of rusted car parts short, here's the ending to each story... 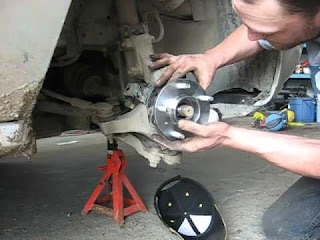 The Saturn:  after a lot of hammering and a brief encounter with the acetylene torch, the rotor came off.  With the rotor off, we discovered that there was some issue that we could not fix with the time we had left in class. I'm not entirely clear what that issue was, as I was helping to pry the drum off the truck, but the result was a car that was left on the lift when we all left class.  The day time students were going to take a crack at it, apparently.  I gave Ricky a ride into Hyannis...hoping he gets his car back sometime tomorrow. 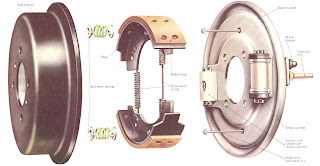 The F150:  basically ended up needing a new drum because of the inside parts rusting together.  A part Josh did not have.  He decided to just put it back together, get a new drum, and finish the job at home.

So, after all of my struggling to drag myself to class this week...we accomplished nothing.  Although, we did get to re-thread some bolts and nuts.  And we did get to clean up the rotor on a cool lathe thing.  That was interesting. 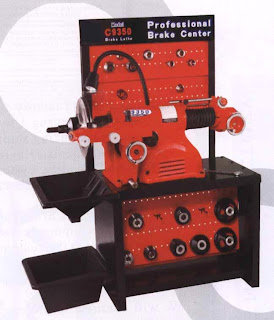 Next week:  (hopefully) I get to do my front brakes!  That of course means some shopping this week/weekend.  I'm not going to make Josh's mistake.  I'm buying everything I MAY need.  If I end up not needing new rotors, then I return them.  But I don't want to get halfway through the job and discover I should have bought rotors. 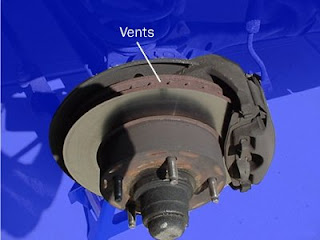