Parts are being removed!
The car is to be towed to my house (about 25 miles from where it is now).  Because of the headers and exhaust that were replaced way back when, we had about a 3" clearance between car and road surface.  This was going to make towing this car a bitch!
It was already on the agenda to remove the headers and exhaust, so this past Sunday, we all met at Steph's to get the car ready to tow.
Dan came with his grinder, to just cut the headers off, to avoid having to do any major work in such a time squeeze (he's busy...I have the in-laws visiting).  After some debate about the best way to do it, we agreed that going underneath, and just cutting the exhaust off, for now, would be the most logical. 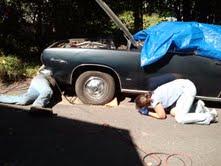 In theory, it would be quick and easy.  But nothing ever is! 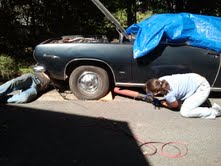 The last pipe he had to cut through was in a position that made it tricky to cut without damaging other parts.  So I got to help by trying to bend it out of the way.  We ended up cutting the passenger side exhaust off, before going back in to get to that last pipe.﻿

District 9!!
(this is when Dan simply rolled his eyes at me.)

During our cleaning session, I removed the air filter, so that we could shut the hood.  This last visit, I actually got to use my new tools and remove the old carburetor!  Seems real, now. 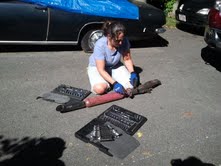 Also used my tools, and Dan's (mine is the little girlie set next to me) to take the collector from the exhaust pipe.  Yep, that's the other Purple Hornet glass pack.  Dan says we should use them...they mean nothing to me, yet.
So that's where we're at.  Ready to move the car, but not sure the best way to do it.  Well, we will probably rotate the back tires to the front, if we tow with Dan's truck.  Possibly not bother if we can afford a 25 mile flatbed tow.  I hope I am still able to drive when this thing is done!
Just a side note: all pics here were taken with Steph's phone, because I forgot to bring my camera!!﻿
﻿