Two posts in one day!? ugh, I know...
To be fair, this is my documentation of this madness, and my memory is crap so I need to get stuff down before it's gone.
Again, I had one real goal today and that was to work on the car for a few hours. My secondary goals were to finish up the fuel line and possibly continue drilling the bolt hole. Then, of course depending on my energy and state of mind, maybe move onto something else on the list.
'Real goal': accomplished. I worked for about 3 and a  half hours before succumbing to hunger. I forgot to eat before heading out to get to it. I also forgot I got up at 4 and was out the door at 5 this morning for a 30 minute run. And 3 hours seems to be my 'time to beat', I did okay.
'Secondary goal #1 (fuel line)': accomplished!
It was very slow going, as I am still not skilled at the art of line bending. It was terribly frustrating and it's not the perfectly bent line I was hoping to install when I bought a 'pre-bent line', but somehow I managed to get the line in and bolted/bracketed in.
As I mentioned with my first post, today...these two lines needed to be connected... 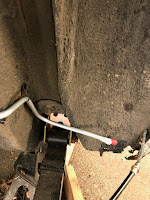 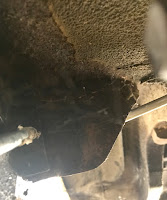 After some more cutting and bending and fighting and cursing and comparing the new bends with the bends in the old line (which of course I kept for reference!) and more struggling...I finally got bends to match up enough to get the new line into the hooks.
I wasn't really sure about adding the rubber line. I've watched multiple videos about it. I've double checked fuel hose ratings. I changed the blade in my utility knife. I had my box of assorted clamps. And I've put off enough stuff due to anxiety that I just had to do it.
I think I did a pretty good job!
I mean...it looks right... 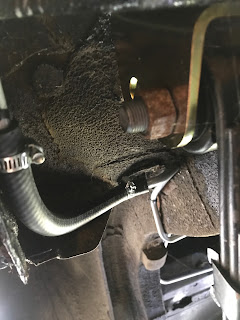 Next up was the front end. This where I had to do more research. I was under the impression that the original lines were 3/8, rather than the 5/16 that they actually were. So I bought a sending unit in 3/8"....and fuel line for 3/8"...but for some reason, my new pump to carburetor lines are the proper 5/16". So after some inquiries in the forums, I was told that if I had 3/8" from tank to the front, that I could simply get an adapter to connect the 3/8 fuel line to a short run of 5/16 line to the fuel pump!
So, I did!
That was, after all the struggle with getting the line to shape/fit in properly at the rear...then realizing I needed to do more bending at the front end to get the line tight into it's final bracket, just about all I could do.
I spent a little more time trying to figure out the grease fitting issue but I didn't want it to put me in a mood, so I backed off.