Okay...both of those things are misleading.
I took an extra day off from work to get 2 days in a row to work on the car. And, it's only a 'marathon' to me in the sense that I have never (that I can remember) worked on the car on consecutive days. It's quite a big deal, for me actually! I'm glad I did it, too, because I actually feel like today I can really finish some things!
FINISH!
I almost think the idea of getting something actually checked off my list, rather than just adjusting the task, is a little odd. I mean, this whole project has been 'well, that's a problem...I'll just move on and come back to that.' It's literally a big pile of unfinished projects under the umbrella of 'car restoration'. Yes, I know that is basically every single car restoration (or home restoration), and although the years I've spent on this may seem contrary to this point, but I like to finish a project and move on. It is hard for me to have a thing that needs attention day after day after day (a good reason that I don't have kids!).
But I'm getting away from he important stuff here...per usual...let's just move on to the meat of the story.

So yesterday was Day 1 of my 2-day build-a-thon.
The long and short of it: I made some progress but did not get as far as I had hoped.
My daily goals are set pretty low, since I have a history with this car.
#1: get the old headers out, by cutting whatever pipes are in the way of pulling them up and out
#2: finish drilling the tank strap bolt hole
#3: if all that gets done, move onto Day 2 list

Seems simple. Easy. Straight-forward.
Well, it is all that, but it's also just a day in the life of my first car project.
I made surprisingly good time with the pipe cutting! My original plan was actually to get to the tool store early and pick up a pipe cutting tool...a flaring tool, maybe...see if i could find anything that looked like it would be helpful in getting my u-joint grease fitting back in (I think the rear axle may have to come off for me to fix that silly mistake)...but the stores didn't open until 8! I thought I could get in by 7:30, but 8 is too late...commuters and beach-goers are already crowding the roads by 8.
So, I went at it with my mini hacksaw and the blades I had left from the bolt cutting I had to do previously. 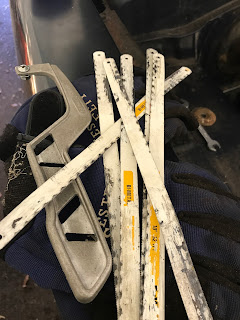 6 blades...both ends and as far into the middle as I could get. I had to skip my yoga after all the sawing and drilling and mowing the lawn and whacking the weeds the day before...I could barely lift my arms to feed myself by yesterday afternoon!

But, of course, I had the proud moments of solving my problem.
In the past, I start work on the driver's side of the car. Probably because that side of the carport has more clearance. But, the driver's side headers were packed in around the steering column and I just wanted to do the easy side first, for once. After the first cut was so awful, I tried to be more methodical about the angle I cut the rest of the pipes. I was able to cut 3 on each side to pull the headers out. 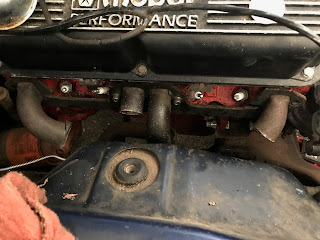 The middle bolts, on the driver's side, were a little tricky to get to so I thought I could cut that one first, to get a better angle at the bolt. However, I didn't actually pay close enough attention to where I was cutting so I didn't get in close enough anyway. To add insult to injury, when the pipe was cut, and I tried to pull it out, it was getting stuck on something...and the tie rod got in the way of pulling it out from underneath. So there it hung. I was hoping I could get away with cutting just 2 pipes but the two left in this picture are basically stacked so they wouldn't clear the steering column if I pulled up. So I cut the pipe all the way to the right, which was a little tricky in the end, since that first pipe was still hanging there. 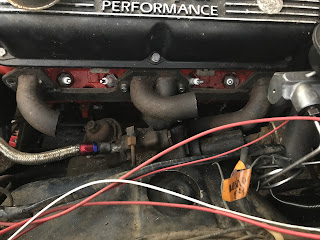 But I did it. I cut 6 pipes using my mini hacksaw. It wasn't really that difficult and didn't take all that much time, to be honest. The hardest part was starting the cut.
Finishing the cut was a bit tricky on some, too.

This is the last pipe I cut. You can see the first pipe I cut, stuck hanging off the one I'm cutting. 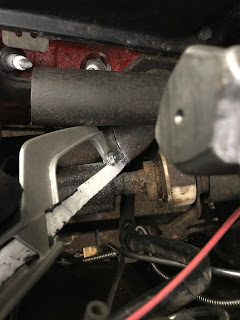 Once I got the headers out, I cleaned up around the spark plugs and swept up all the metal shavings and other such debris from the years. 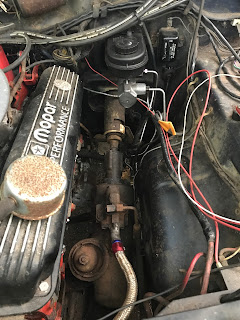 The plugs look new to me, but I didn't take any out to see how they look on the other end. 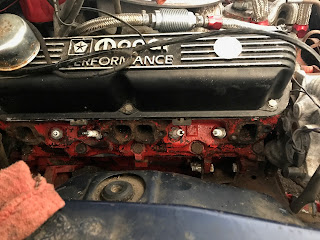 I have the old valve covers, which I think would be fun to put back on, but I really like these Mopar ones, too. The old ones are just red.

Today's plan is to, first of all, get an earlier start. Since the sawing and drilling are the loudest tasks on my list, I can go out as early as 7 or 8 today. Maybe do some more drilling at the end of my day.
I'm hoping to tie up the fuel line issues:
fix the broken line near the wheel well
I'm nervous/anxious to finish up all the brake stuff I still need to finish. I'm not really sure why. It's almost like I don't want to finish it. I guess because it's the only thing that is really new. Everything else is just replacing old parts. This is a new system to this car and I don't want to fuck it up.
A big part of it, though, is thinking about getting all these new parts in and then it just sits there with all the new parts rusting away while I try to figure out the engine.


Get to bridge...then, cross it...
I have to stop looking ahead and imagining the road blocks that may (or may not) appear and just enjoy the feeling of accomplishment each time I get to the next step.
I know, I know...