A quick update before moving onto today's project:
After the initial struggles with the brake lines connecting (or rather, not connecting) to the proportioning valve last weekend, I spent the morning of my day off trying to figure out why things weren't fitting as they should. After a friend suggested loosening the valve from the car to get a better angle to see what was going on, I ended up disconnecting all the lines and, long story short, I discovered that the diagram I had drawn myself did not match up with the photo I had. Thankfully, I remembered I had taken pictures for reference. Once that was worked out, I was able to get that all squared away and decided I'd just jump into the headache of getting the fuel line in.

And that's where we are today.
Having wrestled with the original line, trying to get it out in one piece but ultimately having to cut it into at least two pieces to get it out, I knew I was in for another wrestling match.
I had to unbend the pre-bent line in order to get an angle that allowed me to get the line through the one tiny hole where it goes through the frame.
I was able to get it through with a fair amount of struggling...and more bending and straightening of the line.
But, as we know...nothing is that easy, as to just be a little bit of a struggle. It has to be a full on brawl with these parts to get them back in!
I did finally get it pretty much where it should be...see how professional and nearly perfect it seems! 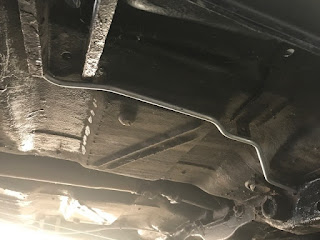 Well...the rear end of the line is a different story... 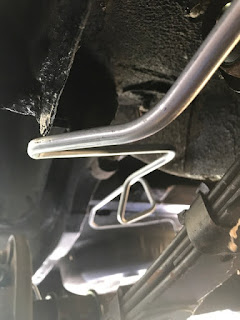 It's so close to being where it's supposed to be, going by the clips that are still on the car, but it's just not right.
The bends are right, but just not in exactly the right place. 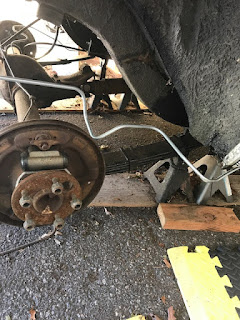 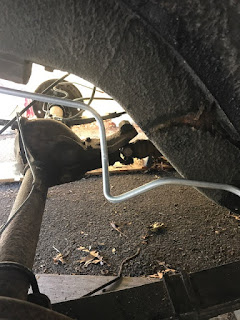 I will play around this later, to try to get the line to match up with the old pattern and clips, but the bit just along the frame rail is causing a lot of trouble. I'm not quite strong enough to bend by hand and my line bending tool isn't the right size. So, back to the tool store I go, I think, before I can get these bits to match up.
***no tears were shed during today's struggles***