Just another weekend here, for me. Saturday is one of my regular days off from the J.O.B., so I really should be working on the car every weekend. My excuse has been that I'm far too busy with other projects right now...but that excuse won't fly for the rest of the summer, since those projects are done.
I do have lots of irons in the fire, so to speak, but this car project is one of my priorities again.
So, onward and upward and back at it!!
I had decided to get the fuel system re-do going. so I pulled out the shiny new gas tank...to discover that it was not the right tank! I freaked out! I have had this since the beginning of May. MAY! When I got it, I was just so excited at how shiny and new it was that I didn't even think to make sure it was right. Rock Auto had not let me down, once, with all the things I'd ordered so far...I just took for granted that the past shipments had been spot on.
So, then I had the task of figuring out how to send back a gas tank. And hope that they would still let me return it, even though my window of return had closed just a few days earlier. I filled out the form online, regarding the return. I emailed, after my computer froze during the process. They emailed back, and things were worked out. The old tank went back yesterday and I got an email today that the new one is ready to ship.

No worries.
I can still get stuff ready.
Like figuring out the tank strap and just where does that J-bolt attach?
Well, here's super fun bit: 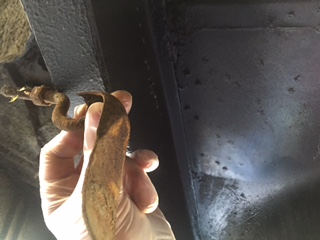 Well, we'll get to that later, shall we? Since I'm not a real pro with the drill, I need to be extra super sure that that's what I need to do. (though, I'm like 99.9% sure, since I have no idea where else it would attach, given that's the positioning for the tank.) My friend suggested it might actually attach through the trunk, but looking at my manual, I think it goes through the frame. Another question for the forum, maybe, to make sure I only drill what needs to be drilled!
Ok...so no tank and no hole for the J-bolt. I guess that part of the project can wait.

Onto the fuel line!
That should be easy enough:
detach at ports and pull off car. 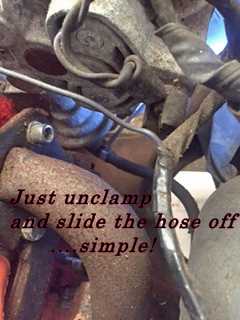 First of all, I do not have dainty lady hands. I was told once (by a 14 year old boy, so I let it slide) 'you have manly hands'...well, he wasn't wrong. But somehow I got my hand and screwdriver in there and loosened that clamp. And then pulled and twisted  and yanked and swore and pried with a screwdriver....that hose was on there TIGHT! Which, of course, is good news when you're out driving around. Bad news when all you want to do is detach the freaking hose and move on to the next thing!
I did have a plan for getting the old line out: cut the hose at the point just after it passes through the frame, and pull it out in two parts. 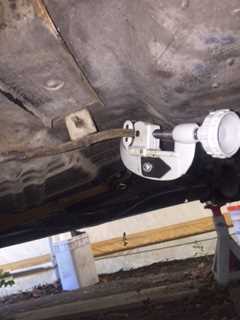 I found this handy pipe cutter in a box of tools I lifted from my dad's house after he passed away. Originally I had thought it was a clamp, but I've used it several times (I actually had two but I broke one). Anyway, I was ready with a pan to catch any fuel that may still be in the lines.
It was at about this time, lying on the ground, totally aware of all the bugs and dirt I was rolling around and covered in, that I saw this little (not little) guy drop from the car to pull a caterpillar up with its web!! 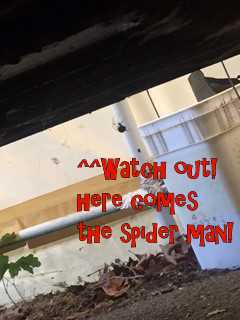 I had one eye on him the rest of my time under the car. He was about the size of a dime.
At any rate, he did not keep me from my task at hand... 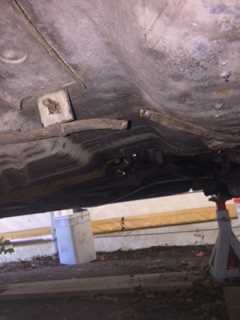 The line was cut and now just pull it through and up and out!
As if!
I couldn't get the proper movement to get the bend through the frame, so I had to make another cut. The first one was tricky getting enough room to twist the line cutter, but the second cut was of course easier, having the luxury of a free moving line.
I actually had some trouble getting it out of that clamp (the left side of the picture, above), until I stopped to sort it out in my brain and simply used some vice grips to pinch the clamp and just leave it attached (read:rusted) to the hose. Further down the back end, I had similar difficulty with the clamps and had to bend to break a few more.
So, I managed to cross that off my list. It was a short list, because I've learned my lesson: budget about 3 times the time you think it will take to do a 'simple task', and make shorter lists.
Figure out a plan for the J-bolt was also on the list. Plan is in mind...just need to execute it.
Next on the list was to figure out how to work with my new sending unit for the gas tank. When I had to compare the old and new tanks, I realized my new sending unit also looked different from my old one. An extra port.
Onto the Cuda-Challenger forum to see if anyone else has dealt with this and what the solution/s is/are. Some people simply cap the extra port. A fellow cuda restorer on facebook recommended I consider using it as it is intended, as a vent line.
Which I'm totally down for...but, how!?
I mean, where does the vent line go?
If my old tank didn't have it...how do I add it?
I at least know where to begin looking, so I opened up the trunk and checked out the filler pipe. 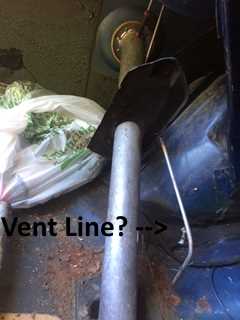 Looks like a vent line to me! However, according to the diagram in my Haynes manual, that simply goes back into the tank next to where the filler pipe attaches. So I'm kind of in the same place I was before, unless my replacement tank doesn't have the vent port by the filler attachment...or...I can vent it as the manual says and just cap the second port on the new sending unit.
But, that will be a task for another day, since, as we learned at the beginning of this story...
you must examine your packages upon arrival or suffer the consequences when you really should be moving forward, but instead you're making more work and pushing yourself further behind schedule...wait...what lesson am I trying to teach?
It doesn't matter.
What matters is that I have plenty more Saturdays to chip away at this beast.