what strange weather we've been having! one day it seems as if spring is early, then the next day we wake up to either snow or the threat of it. yesterday was sunny but cold, to start, after days of just the most intense wind. i bundled up to go get some stuff done on the axle, which is stored in my shed, since i have no where else to work. well, i do have a table set up in the basement, but i'll be damned if i'm lugging that axle down to the basement!
as i've mentioned, parts have been coming in, with the last of my packages arriving just a couple days ago. my plan was to try to reuse as much as possible, to stretch the ol' budget, but the thought of trying to get the old bushings out of the original shackle hangers was giving me nightmares.
especially after the struggle to break that last U-bolt off the rear shock plate!
so, getting back to my point...i went out to work in the cold shed...
but with the sun beating down and the wind finally ending, it turned out to be a beautiful day to work outside. unfortunately, i was not fully prepared for what i was about to do, so i was in and out of the house. up and down the basement stairs. and scurrying around the yard. all for the things i should have had ready to go. i had my tool bag, but my screwdrivers were still on the table in the house. i was lucky enough to find an old developer tray in a stack of stuff by the garden beds, to catch the gear oil i was not expecting, but now had to deal with. but once in the pan...where do i put it? back down to the basement to find something...ANYTHING...to store the old oil. i found an old (empty) laundry soap bottle. i had just made a trip to the recycling center, but this didn't make the trip, thankfully! and, while i was downstairs, i remembered that my funnel was in a bag of stuff i cleaned out of my car when i traded it in for my new car...3 years ago.
it was quite a party. there was a mess of oil...i went through many double layers of gloves.
once i figured out the issue with the oil, i started removing the old seal. it was pretty embedded around the bolt holes. after a lot of scrubbing, i'm going to have to get back out there with a razor blade to get the last bits of debris off. then i'll clean out the sludge and get to putting it back together.

today's weather included some crazy snow squalls while i was at work, but just periods of grey clouds and lovely sun, by the time i got home. unfortunately, after work and lunch and working out, i have little time (or motivation) to get outside, this time of year. but i have a list of things to keep me busy the next couple of days.

i'm terrible at remembering my after pictures (probably due to my dirty hands), but here's a few pics from yesterdays adventure: 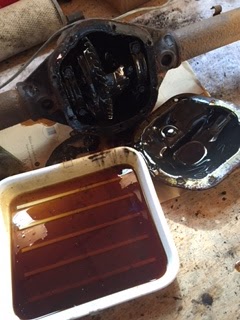