I'd love to say that the days and days of rain is the reason that i've been lazy about working on the car. But it's really only part of the reason. The main reason is because I've spooked myself. I've convinced myself that I don't have what it takes to see this project to the end.
And that's just silly! I mean, sure, I have no idea what I'm going to do when it comes to the engine work, but I can figure that out. I know people.
It's true that it's taking me FOR-EV-ER to move along on this thing, and I've thought about giving up several times (but then couldn't figure out how to get that heap of metal out of the driveway, anyway, so why not give it another go, right?), but I always go back. Maybe it's because a lightbulb goes off and I figure a different way to get past my roadblock. Or, maybe it's because a new person enters my life with the knowledge that I need to move past my current problem. Or, maybe I just somehow summon the strength and courage to push through my doubt and get shit done.
This time it was a combo, really...
and I'm still moving along.
Here's where we were last time: unable to get the tie rod out. Why, you ask? Well, because, as we know by now, I don't really know what i'm doing. So I could not get my impact wrench in a position to get the nut off. But, with media, my super power of admitting I am ignorant, and my collection of car friends, I was guided. 'Turn the steering wheel' my friend Pat told me. Of course. Sometimes you just have to put yourself out there and be ready to feel like a complete dolt. 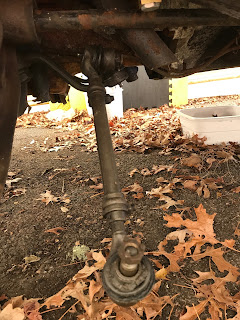 I turned the steering wheel and, low and behold, I had no problem on the driver's side. The passenger's side was a little more of an issue, but I still managed to move along.
The tie rods are out. 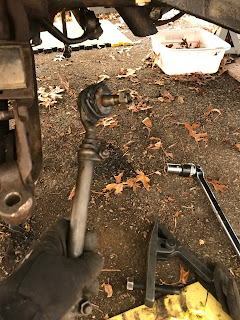 They, of course, needed some cleaning...and removal of old bushings. Removing old bushings isn't all that easy, by the way. 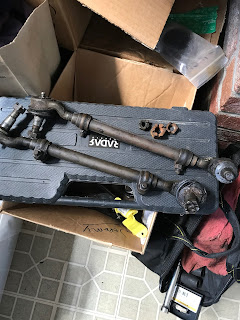 They've been cleaned up. 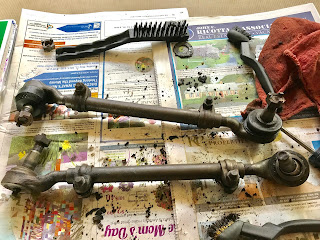 The new bushings are on and it's basically ready to go back in. 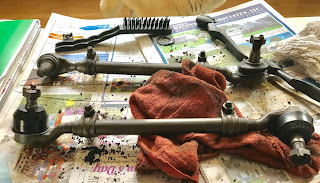 And that means we finish that brake conversion! The thing that started it all, in my eyes. The upgrade that I thought this car needed. Let's face it, it's not a great looking car to start, so spending money on body work wasn't really important to me. It's a heavy beast so souping it up to become a race car would be the most ridiculous idea ever (that's my next car. *wink*). I just wanted to get it running so I could drive it around a few times during the summer...maybe hit a car show some weekend...then maybe sell it to recoup the money I put in (which is basically the few dollars I got from a lawsuit my dad was involved in before he passed away). So, since driving on the Cape means having brakes that work...I was willing to spend the bulk of the budget on this disc conversion...and it's about to happen, folks! Years later, I can actually say I'm ready to start emptying the boxes of rotors and dust shields and calipers and (ugh) adapters...

While playing my usual game of getting frustrated and feeling like I couldn't make any progress on the car, I decided to do some cosmetic stuff (nothing major...just trim and window stuff)...
DECORATIVE DOOR TRIM: 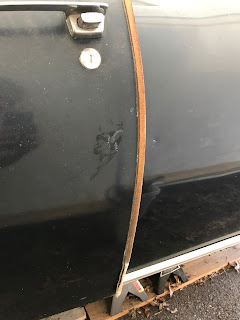 I also replaced the weather stripping between the front door window and the quarter/back window. The door still needs to be adjusted to make it water tight (another procedure I didn't know about until my friend Pat mentioned it...more researching needs to be done there.)

So that is where I'm at now.
And it's been raining for a week, basically. With another weekend of more rain ahead of us.
We shall see when I get back out there, but I'm feeling good and positive about where I'm at. Just trying not to think about the engine and floor boards just yet. (oh, yeah...I bought a pre-fab floor pan to weld in to fix the driver's side floor rust...another adventure there, for sure!)