Preparing for winter;or, we gotta fix those seals! 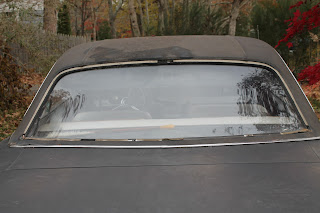 This is our awesome back window.  One of the things I love about this car is the back window.  I'd love to not have to remove it; but, as we've come to realize, rust is a bigger issue than I was aware of.
At first I thought the major issue with the rear window would be replacing the trim.  But, as we learned from my last post, it's leaking pretty heavily into the trunk.
So, again taking advantage of the relatively nice weather we've been having, I set out to try a temporary fix...at least for the winter. 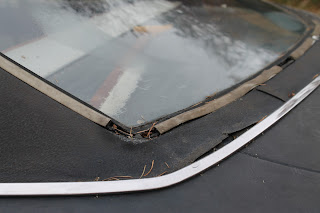 So, here is the major water entry.  You can see the vinyl roof is has also been compromised.  This is the major area of roof damage, too.  I was so hoping to not have to also replace that, but I think I lose there.
I, of course, did not get an 'after' shot of the seal job I did.  I bought an auto/marine clear sealant and just put a thin bead around the entire outer edge of the trim.  I don't honestly know if this will even help at all, considering the damage I am sure is under that part of the roof vinyl, but I'm going to get the hose, or a bucket of water, to test it tomorrow...just being sure it's good and dry!
Now, onto the 'major' project I have been putting off since the car arrived at my house...the roof rails. 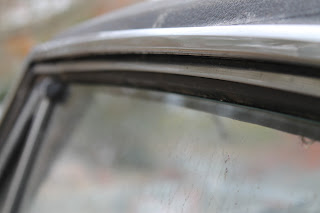 Perhaps you can see how the seal doesn't exactly form a tight seal against the window?  The day we 'washed' the car, the water practically poured right in and down the inside surface of the window.  Maybe that's why the floor is soaked all the time and I'll be lucky if the floorboards aren't completely rusted out?  Ugh!
I have been dreading replacing these seals.  First, I had no idea how to go about doing it.  I can't find any info on replacing these anywhere!  I scoured YouTube and all the manuals and car mags I have and there's just no mention of it anywhere.  Secondly, after the trouble I had doing the trunk seal, a horizontal workspace and a clear beginning and ending spot, I just didn't know how I would be able to glue that seal in place AND...what do I do when I get to the end, at the back window??  Just cut and stuff?
Well, miracle of miracles, this is what I found when I started to remove the old seal... 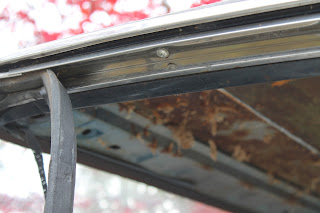 ...NO ADHESIVE!
It simply gets tucked into the channel!  And, yes...at the end, I just cut the excess and stuffed it in place!
Of course, once it was in, I couldn't really figure out how the window was supposed to fit into the seal, but I think I got it. 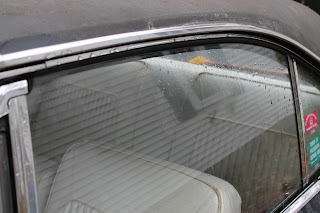 Not that you can tell from this shot, but after a couple adjustments, I was able to successfully do the water test without drips on the inside of the window!﻿
﻿
So there you have it.  The major 'body work' I wanted to finish by winter, and before I felt comfortable moving onto the engine parts.
This is where I really start to freak out!﻿