and then i said to myself, 'i may be in over my head'

My sister says, 'it's not dad...it's just a symbol.'  And with those words, I realized, this is now my project that she may help with now and then.
With the little bit I've done now, I can tell there will be a lot of 'now and thens' in the future because this car is in worse shape than I anticipated.
My understanding was that the engine needed to be restored, some tweaks here and there, the timing was off before so that needed to be addressed...there's a bit of rust at the rear, but nothing major.  I mean, our brother's a welder, he can help!
But, oh dear, with every step, I wonder what have I gotten myself into!!??

There's the leaky window seals.  That seems easy enough for a girl with no car knowledge to tackle.  I ordered the roof rail seals, stopped at AutoZone for the adhesive, and took advantage of a beautiful day to see if I could make this happen.

Well, before I could start anything, I had to stop ignoring the fuzzies protruding from the visors.  It was pretty clear from the beginning that there had been a family of somethings living in that headliner at some time. 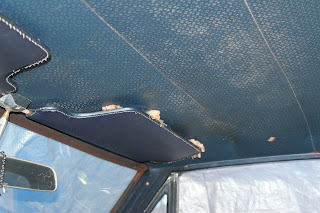 ﻿
Clever girl that I am, I decided that this was something that would eventually need to happen.  That lovely blue vinyl needed to go sooner or later, why not sooner.  I grabbed my utility knife and started cutting.  I mean, I couldn't make it worse, right!?
After a lot of cutting and ripping and clawing the ancient fuzzy padding from the roof, I got really scared...no one's gonna buy it now, until it's finished. 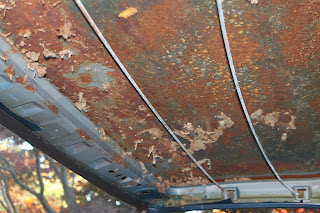 ﻿
Then a little reality hit me: I really want to drive this car.  If we get it running, I don't even car if the headliner has to wait until there's more cash!

But here's where my anxiety really took over, and it has stayed with me...even now.
My friend came by to check out this car I had been talking about.  He thought it was cool.  He looked around, poking and prodding, examining inside and out.  My main concern (the rust) is what put me over the edge yesterday. 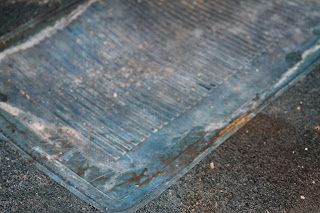 He had said, 'the floor is soaking wet under this mat.  You should get rid of that, and the carpet as soon as possible.'  Well, after pulling up the extra floor mat, this is what I saw.  Not just damp carpet, but muddy water that had been sandwiched between the car's floor mat, and the extra mat I took out.  I was not prepared to pull up the carpet just yet.  I mean, once I do that...I don't know...I feel like I can't do it by myself.  I'm going to need a support system for this one!  And at least a 6 pack or a full flask of whiskey!
Oh, and here's the best news yet...as if my stress level with this car hasn't already hit my personal best, all time high mark...
'You should also get any lining or fabric out of the trunk, if it's leaking, because the trunk will start to rust,' was another great piece of advice my friend gave me. 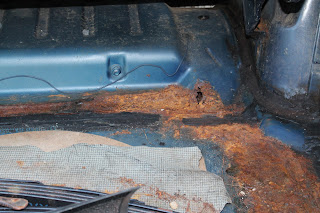 If only he had told someone else...like one of the 3 other people who had this car for so many years?  Big rusty holes in the trunk were not something I was expecting to have to handle.

But, it's our car now.  I can't live in the past and wonder why this car was purchased just to sit for all those years.  I have a tiny budget and I have to just deal with it.  Things will get done as I am able to do them.  And when this car is running, and I'm driving around looking like a crazy bad ass grandma, it will all be worth it.  Even if, right now...at this very moment, I feel like I am so over my head I want to just push the thing into the road and see what happens.