First of all...this post is going to sound a little bitchy.  For that, if you actually read to the end, I apologize.  If you're not up for the ramblings of a frustrated girl who feels utterly alone in a project she was to be a PART of...you may want to stop after I show you the new and improved 'after' shot of the seat cleaning.
So, in case you don't remember how bad the mildew was on our white interior... 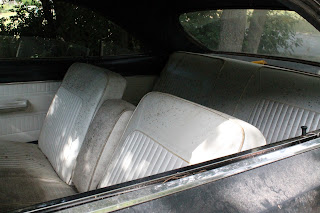 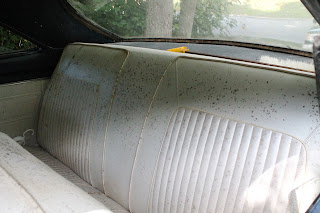 Keep in mind, that I (Jen) was unaware of the fact that the window seals (luckily just the doors, not the windshield or rear window) were crap.  As we sprayed the dust off several weeks ago, the water just slipped right in.  Hence the magical amount of mildew our seats were collecting.  While I am in love with the white interior (!), I have to say that cleaning a black or navy interior would have been much easier.  Of course, while the white is not exactly white yet, I did get more gratification knowing just how much cleaner I did get the vinyl after just one scrubbing... 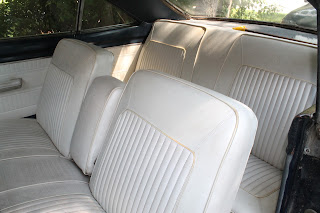 It's still more grey than white at the really dirty parts, but I am happy that a good cleaning is all we will need...no tears or loose stitching to deal with.

WARNING:  Now for the rant.

A quick re-cap of the history of this car:  my father bought it as a bonding project or a 'thanks for all your help' or something for my sister (Steph...the other half of this blog).  Soon after purchase, our older brother (Dan) had knee surgery and started spending time off with dad...and, making adjustments to the car per dad's instruction.  Dad, being legally blind and (at the time, temporarily, but eventually permanently) in a wheelchair; but, also a former hobby drag racer, decided to soup up the engine.
I don't know if it was smart thinking on Dan's part, or shear dumb luck due to our family's need to keep everything, but for each new part they put in, the original parts were put in dad's shed.
Anyway, the reason we are in the situation (a car with a too big engine) is not because of Dan (as Steph had suspected), but because our father thought he could make this unassuming coupe/sedan into a race car.

So, what's the big deal?  Now's my chance to learn about cars.  Not only that, but having never spent time on cars with my dad, I have the luxury of having a brother who wants to show me the things he has learned from dad.
Well, the problem is the drawn-out process of merely getting started!  How long is it going to take to actually get some work done on this car!!??
It sits there, at Steph's house...20 miles away from the only person who actually has time to work on it.  Here's the real kicker, the longer we go not working on it, the more obvious it is that we're not all at the same level of excitement anymore.
And, financially speaking, I am likely the ONLY source of dough.  I have less faith that this will ever get done, each time I try to get things moving.

Here's an upside to the whole breakdown I'm having...Dan, bless his heart, still wants to help.  Maybe it's his desire to have a relationship with his sisters; or, perhaps he just wants to be in on any end results (such as a little cash, should we decide to sell the finished product).  But, whatever his motives, he's helping.  It looks like we will be able to move the car to my house at some point.  And Steph is okay with that.  She is more emotionally attached to the car, but she has admitted that I am clearly the major supporter of this project (especially since I'm the only one who hasn't spent my measly inheritance!).

What, then, is our next step?  Dan will either get his friend to tow the car here, from Steph's ('for just the price of gas'); or, he's considering it a possibility to simply tow the car with his new super truck.  Whatever happens, I'm guessing the car will be in my driveway by the end of September.  If it takes much longer than that to get this particular ball rolling, I may have to just give it up altogether, because I don't know how much more 'standing around' I can take.

Sorry for the ranting...I promise the next post to be actual car related information!