I haven't been playing Bingo... 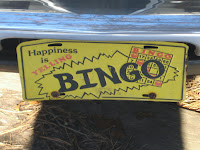 I haven't posted in quite some time. Snow storms, new 6-day work schedule, and a whole slew of other day-to-day hassles getting in the way, I suppose.
But...the past couple days here have been sunny and in the 60's! I hear there's a bit more of the cold weather on the way, but that's to be expected since it IS still just March.
I'd love to start some work, but Steph's been working mid-shifts at her job, so me getting out at noon doesn't really count for much yet. Then she's off for a long weekend in Boston with our other sister, so it looks like we're looking at maybe starting some work early to mid-April.
In other good news, it looks like Dad's foot is healing since his last surgery has opened up an important vein in his leg. That means, maybe out of the wheelchair after some physical therapy, and more help to his knowledge-less daughters!
I'm not sure how it will be to work WITH Dad, though. He's a very aggressive personality, and I am sure his short fuse will lead to some serious frustration the first time he says something to Steph and I, only to be faced with two blank faces and shrugging shoulders.
My hope is that in my adulthood, I will not shed tears out of my own frustration with him. The DAY he taught me how to drive a standard (in a lovely Ford Probe!) I cried. Maybe it was because of me, but my memory of it begs to differ. I remember him becoming frustrated when I would stall in first, and say, 'Just do it like I said! Let up on the clutch and press the gas at the same time!' Which is what I was doing but 50% of the time my timing just wasn't right.
After that day, I swore I would never drive a standard. Then my mom's car died and we were down to the one car...for the 3 of us. And I was back from school (one year was enough for me at the time!) and working full time, too. The Probe! I went out driving with Mom a couple times, because she put me more at ease, but I just never got comfortable driving that car. But I had to do it. My job was a five minute drive from my house. I left 30 minutes early each time just so I would have time to calm down after the stress of driving! It was awful. After a couple weeks, I bought a bike!
When Hubby and I started dating, he drove an old Volkswagen Fox. Standard. (I had an '84 Cavalier...p.o.s. but I loved it...my first car!) My car died and he helped me pick out my next car, Acura Integra (loved that one, too, but the body rusted, someone hit me, I took the money and bought another Cav!). All the car shopping had him looking to get rid of his car. He found a blue Toyota MR2 ('89?) and tried to get me to talk him out of buying it, but instead I said, 'You like it? Get it!' And that was the second car with a standard transmission that I tried driving. This time, I had a more patient teacher, but bigger hills. It ended with a couple cars lining up behind me at a stop sign at the top of a small hill. After stalling a couple times, I threw on the parking brake, got out of the car and he had to drive us home.
Good thing this Barracuda is an automatic, or I would probably have ignored it like everyone else has lately.
I don't mean to keep writing 'reminiscence' blogs, but it seems they always turn that way...at least until work actually starts.
(The sun is shining...that's a start, I guess?)